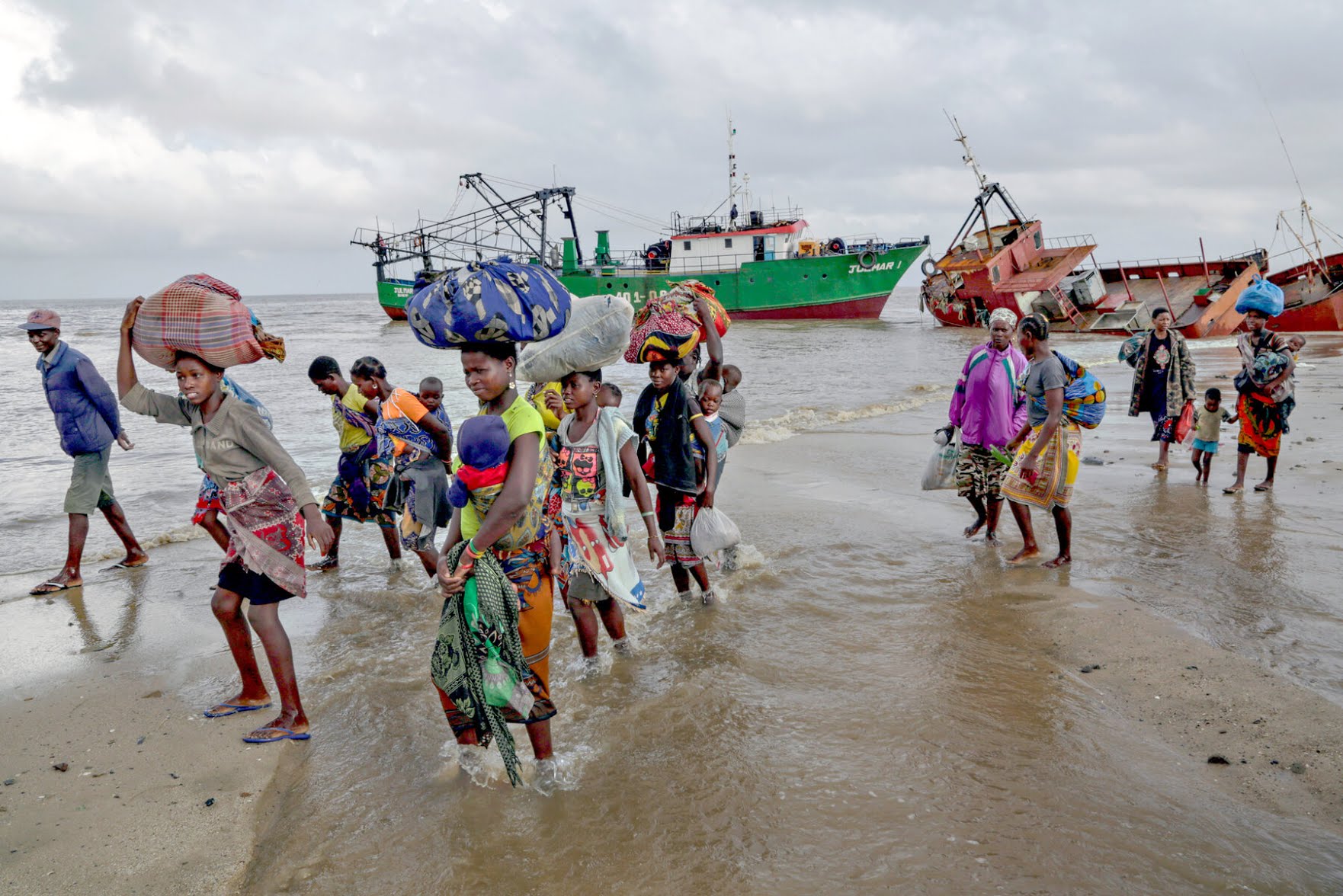 With dozens of countries struggling to manage both staggering debt and mounting climate disasters, some financial leaders are calling for green debt relief.

How does a country deal with climate disasters when it’s drowning in debt? Not very well, it turns out. Especially not when a pandemic clobbers its economy.

Take Belize, Fiji and Mozambique. Vastly different countries, they are among dozens of nations at the crossroads of two mounting global crises that are drawing the attention of international financial institutions: climate change and debt.

They owe staggering amounts of money to various foreign lenders. They face staggering climate risks, too. And now, with the coronavirus pandemic pummeling their economies, there is a growing recognition that their debt obligations stand in the way of meeting the immediate needs of their people — not to mention the investments required to protect them from climate disasters.

The combination of debt, climate change and environmental degradation “represents a systemic risk to the global economy that may trigger a cycle that depresses revenues, increases spending and exacerbates climate and nature vulnerabilities,” according to a new assessment by the World Bank, International Monetary Fund and others, which was seen by The Times. It comes after months of pressure from academics and advocates for lenders to address this problem.

The bank and the I.M.F., whose top officials are meeting this week, are planning talks in the next few months with debtor countries, creditors, advocates and ratings agencies to figure out how to make new money available for what they call a green economic recovery. The goal is to come up with concrete proposals before the international climate talks in November and ultimately, to get buy-in from the world’s wealthiest countries, including China, which is the largest single creditor country in the world.

Kristalina Georgieva, the managing director of the I.M.F., said in an emailed statement that green recovery programs had the potential to spur ambitious climate action in developing countries, “especially at a time they face fiscal constraints because of the impact of the pandemic on their economies.”

One of the countries at the crossroads of the climate and debt crises is Belize, a middle-income country on the Caribbean coast of Central America. Its foreign debt had been steadily rising for the last few years. It was also feeling some of the most acute effects of climate change: sea level rise, bleached corals, coastal erosion. The pandemic dried up tourism, a mainstay of its economy. Then, after two hurricanes, Eta and Iota, hit neighboring Guatemala, floods swept away farms and roads downstream in Belize.

Today, the debt that Belize owes its foreign creditors is equal to 85 percent of its entire national economy. The private credit ratings agency Standard & Poor’s has downgraded its creditworthiness, making it tougher to get loans on the private market. The International Monetary Fund calls its debt levels “unsustainable.”

Belize, said Christopher Coye, the country’s minister of state for finance, needs immediate debt relief to deal with the effects of global warming that it had little role in creating.

“How do we pursue climate action?” he said. “We are fiscally constrained at this point.”

“We should be compensated for suffering the excesses of others and supported in mitigating and adapting to climate change effects — certainly in the form of debt relief and concessionary funding,” Mr. Coye said.

Many Caribbean countries like Belize do not qualify for low-interest loans that poorer countries are eligible for.

The United Nations said Thursday that the global economic collapse endangered nearly $600 billion in debt service payments over the next five years. Both the World Bank and the International Monetary Fund are important lenders, but so are rich countries, as well as private banks and bondholders. The global financial system would face a huge problem if countries faced with shrinking economies defaulted on their debts.

“We cannot walk head on, eyes wide open, into a debt crisis that is foreseeable and preventable,” the United Nations Secretary General, António Guterres, said last week as he called for debt relief for a broad range of countries. “Many developing countries face financing constraints that mean they cannot invest in recovery and resilience.”

The Biden administration, in an executive order on climate change, said it would use its voice in international financial institutions, like the World Bank, to align debt relief with the goals of the Paris climate agreement, though it hasn’t yet detailed what that means.

The discussions around debt and climate are likely to intensify in the run up to the climate talks in November, where money is expected to be one of the main sticking points. Rich nations are nowhere close to delivering the promised $100 billion a year to help poorer countries deal with the effects of global warming. Low- and middle-income countries alone owed $8.1 trillion to foreign lenders in 2019, the most recent year for which the data is available — and that was before the pandemic.

At the time, half of all countries that the World Bank classified as low-income were either in what it called “debt distress or at a high risk of it.” Many of those are also acutely vulnerable to climate change, including more frequent droughts, stronger hurricanes and rising sea levels that wash away coastlines.

(The fund said on Monday that it would not require 28 of the world’s poorest countries to make debt payments through October, so their governments can use the money on emergency pandemic-related relief.)

Lately, there’s been a flurry of proposals from economists, advocates and others to address the problem. The details vary. But they all call, in one way or another, for rich countries and private creditors to offer debt relief, so countries can use those funds to transition away from fossil fuels, adapt to the effects of climate change, or obtain financial reward for the natural assets they already protect, like forests and wetlands. One widely circulated proposal calls on the Group of 20 (the world’s 20 biggest economies) to require lenders to offer relief “in exchange for a commitment to use some of the newfound fiscal space for a green and inclusive recovery.”

On the other side of the world from Belize, the low-lying Pacific island nation of Fiji has experienced a succession of storms in recent years that brought destruction and the need to borrow money to rebuild. The pandemic brought an economic downturn. In December, tropical cyclone Yasa destroyed homes and crops. Fiji’s debts soared, including to China, and the country, whose very existence is threatened by sea level rise, pared back planned climate projects, according to research by the World Resources Institute.

The authors proposed what they called a climate-health-debt swap, where bilateral creditors, namely China, would forgive some of the debt in exchange for climate and health care investments. (China has said nothing publicly about the idea of debt swaps.)

And then there’s Mozambique. The sixth-poorest country in the world.

It was already sinking under huge debts, including secret loans that the government had not disclosed, when, in 2019, came back-to-back cyclones. They killed 1,000 people and left physical damages costing more than $870 million. Mozambique took on more loans to cope. Then came the pandemic. The I.M.F. says the country is in debt distress.

Six countries on the continent are in debt distress, and many more have seen their credit ratings downgraded by private ratings agencies. In March, finance ministers from across Africa said that many of their countries had spent a sizable chunk of their budgets already to deal with extreme weather events like droughts and floods, and some countries were spending a tenth of their budgets on climate adaptation efforts. “Our fiscal buffers are now truly depleted,” they wrote.

In developing countries, the share of government revenues that go into paying foreign debts nearly tripled to 17.4 percent between 2011 and 2020, an analysis by Eurodad, a debt relief advocacy group found.

Research suggests that climate risks have already made it more expensive for developing countries to borrow money. The problem is projected to get worse. A recent paper found climate change will raise the cost of borrowing for many more countries as early as 2030 unless efforts are made to sharply reduce greenhouse gas emissions.