Greening The Islands > News & Blog > News > Water in a loop: how to combat water scarcity on remote islands 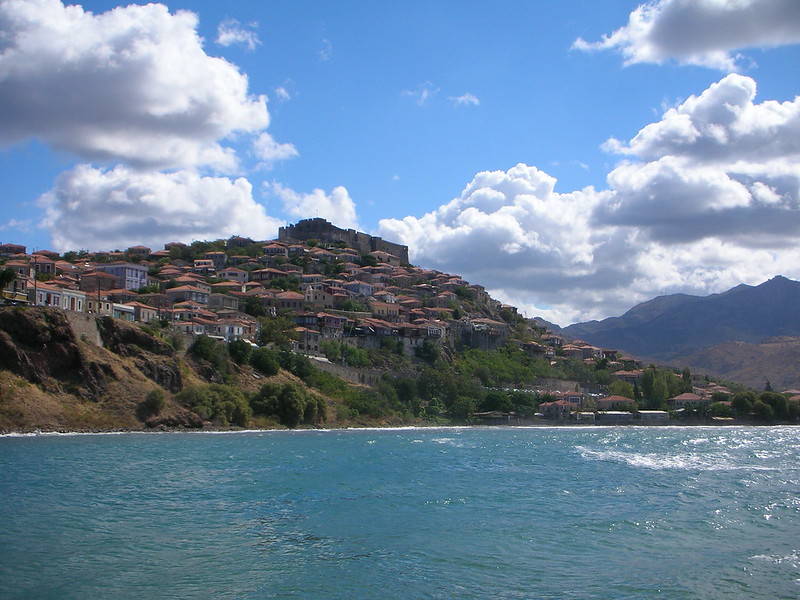 Every summer, thousands of tourists travel to Greece’s idyllic islands to enjoy their sunny beaches. Even the global pandemic couldn’t keep visitors away, but water scarcity might. Many Greek islands survive on water imports and are struggling to meet residents’ and agriculture’s water needs – let alone those of tourists.

These islands illustrate the difficulties faced in other parts of Europe. Climate change is making extreme weather events such as drought more frequent, while burgeoning population numbers and competing priorities, such as agriculture and tourism, mean that there is not enough fresh water to go around. About one in five people in the Mediterranean region suffer from constant water stress – when demand exceeds availability – according to the European Commission.

To address these issues, the project HYDROUSA is piloting its water technologies at sites on three Greek islands.

‘It’s about tackling water scarcity issues in small and decentralised remote regions in the Mediterranean,’ explained Professor Simos Malamis, a water systems specialist at the National Technical University of Athens, Greece and coordinator of HYDROUSA.

The team, which includes 28 partners in industry, academia and government, develops and integrates different technologies to collect, treat, recycle and reuse water. ‘We want to do this in a sustainable manner, in a loop.’

Sustainable reuse is at the heart of the EU’s circular economy action plan, published in 2020. The bloc aims to ‘double its circular material use rate in the coming decade’, which will involve identifying value in products that have traditionally been considered waste. It has also invested extensively in research projects, such as HYDROUSA, to trial technologies to achieve this circularity and open them up to governments and businesses.

The circular economy includes water loops, in which water is treated and reused, with value being derived from extracted ‘waste’ in the water, such as phosphorus or salts. HYDROUSA is working to create these loops in remote areas to benefit local individuals and industries. It currently has six pilot sites on the three islands, trialling 13 different innovations to show their applicability under different scenarios.

Prof. Malamis’ favourite pilot, on Lesbos, includes the greatest number of integrated technologies, he says. Wastewater from a nearby town arrives at a wastewater treatment plant, where anaerobic bacteria break down the organic matter contained in the wastewater. This step produces biogas, which can be collected and used as energy feedstock. In the second phase, the primary treated wastewater runs through a constructed artificial wetland, which is made up of a number of plant species, which clean the water. The resulting water is then exposed to high-energy ultraviolet light to kill pathogens, after which local farmers can use it to fertilise and irrigate their crops, Prof. Malamis explains.

To show that it is actually safe to use, project researchers are also developing an agroforestry site, irrigated with their treated water.

Meanwhile, on Mykonos, HYDROUSA technologies harvest and store rainwater below ground, so that the water does not evaporate in the sometimes punishing Greek heat, and then disburses the water to households. On the island of Tinos, the project’s technologies help an ecotourist lodge recycle waste water and rainwater, using it to irrigate and fertilise food gardens which in turn feed lodge tourists and residents in the nearby village.

These solutions rely on multiple technologies merged together. ‘We have one system coupled together with another, which are from different companies, integrated, to produce the best result,’ Prof. Malamis said.

To combat water scarcity in remote locations, another research initiative, Project O, is blending technologies into water management modules and demonstrating them at four small sites. Importantly, the modules are mobile and can be installed where there are no other facilities.

Two sites are water utilities in Puglia, Italy and Almendralejo, Spain, with another at a saltwater aqua facility in Eilat, Israel, and one with a textile company in Omis, Croatia.

‘It’s about tackling water scarcity issues in small and decentralised remote regions in the Mediterranean.’

Big water treatment plants, such as those common in large cities, are designed to treat large quantities of water, according to Giulia Molinari, a former manager of Project O and now with IRIS, a company commercialising high voltage technology to clean water and working with the project. ‘It is highly inefficient to replicate them locally for a small scale,’ she said. ‘We are trying to use a lot of different technologies on the small- to medium-scale to tailor the quality to the needs (of the site).’

But the various sites and industries have different water requirements. For example, not all treated water needs to be potable, she says. In industry, wastewater treated to drinking quality would be ‘overengineered’ and needlessly expensive.

At the Puglia site, the water is for people to drink. It comes from an aqueduct, Acquedotto Pugliese, and its quality is variable, sometimes salty, sometimes heavily polluted. This means that the solution needs to be flexible, and also able to cope with comparatively small amounts of water (about 20 cubic metres a day). This situation is very different to those in traditional water management, where every day, large quantities of water are treated in the same way. ‘We can adjust treatment so that we do not treat it too much and use too much energy,’ Molinari said.

Project O’s response to the distinct scenarios has been to create four different modules, each containing a cascade of technologies to address the water requirements at each site. At the aqueduct in Puglia, for example, the module integrates a desalinator (which removes salt from the water) and advanced oxidation techniques (which use chemical processes to remove harmful bacteria and organic pollutants from water). At the textile factory in Croatia, the team developed a module that uses sunlight to break down toxic organic compounds and disinfect the water, while in Spain sunlight powers advanced oxidation processes and contains adsorption technologies that can collect pollutants, while a control system integrates two technologies. The module used in Israel recovers nutrients from salty water.

Molinari works on a form of advanced oxidation technology that uses high-voltage electromagnetic pulses to break down pollutants. Currently used in the modules at the Puglia and Eilat sites, the short, but powerful bursts of energy damage illness-causing microbes and degrade organic pollutants, including many contaminants of emerging concern.

Both Project O and HYDROUSA are looking to address one of the most pressing problems in water management: how to treat water and reuse it in remote places, where there is no one-size-fits-all solution, without breaking the bank.

Given the interest from industry and municipalities, both think that they have numerous viable solutions to offer. And as fresh water becomes increasingly scarce around the world, governments and companies will be looking for technologies to treat and reuse whatever water sources they have, even if it was once considered waste.