Greening The Islands > News & Blog > News > Privatising the wilderness: the Tasmanian project that could become a national park test case

Privatising the wilderness: the Tasmanian project that could become a national park test case 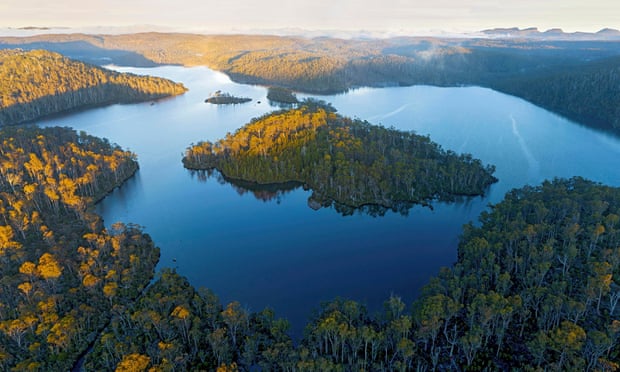 Halls Island, on Lake Malbena in the Walls of Jerusalem national park, is not easy to reach. It takes a strenuous eight-hour walk or a helicopter ride to get there.

Its remoteness meant it was relatively little known until it became the site of the type of conservation battle that Tasmania has become famous for in a storied history that takes in fights over hydroelectricity dams, old-growth forestry and salmon farming.

In 2015, an ecotourism business, Wild Drake, proposed a small tourism development on the island. Described as a luxury standing camp, it would involve four demountable huts housing up to six visitors at a time and helicopter flights into the Tasmanian world heritage wilderness up to 60 days a year.

The Tasmanian Liberal government has been a strong supporter as it pushes to become what the premier, Peter Gutwein, has called the “ecotourism capital of the world”. According to the environment and parks minister, Roger Jaensch, the development “can be appropriate, sensitive [and] manage the values of the world heritage area it’s operating in”.

Conservationists say new government documents released shortly before the Tasmanian election was called have cast this in doubt.

Seen by Guardian Australia, they include a previously unreleased assessment by the state’s Parks and Wildlife Service that found the development could lead to the loss of 700 hectares of high-quality wilderness area and reduce the quality of at least 4,200 hectares – an area 23 times the size of the Melbourne CBD.

Since being elected in 2014, the Liberals have called for expressions of interest from tourist operators for this sort of project and plan to continue the policy if re-elected on 1 May. It has given initial approval to 29 projects of various scales, including guided walks with private huts in the southwest national park and other world heritage areas.

The Wilderness Society says the Halls Island proposal, which currently sits with the federal government, should also be seen as a test case with implications beyond Tasmania as other states including Queensland, New South Wales and South Australia back developments in national parks.

The group’s state campaign manager, Tom Allen, who obtained the documents under freedom-of-information laws, says the parks agency had found the development would degrade “the very thing they’re supposed to look after, and the very thing people visit Tasmania to experience – the world’s most highly-rated world heritage wilderness”.

“The supporters of the parks privatisation push keep talking about sensitive development when this shows it is actually destructive to world heritage wilderness,” he says.

The proponent of the Halls Island development argues otherwise. Wild Drake’s Daniel Hackett, who runs a fly-fishing tour guide business with his wife Simone, says he asked the parks agency to do the newly released wilderness assessment and does not dispute what it found. He just disputes what it means.

He argues “presentation” – tourism – is a Unesco obligation for the world heritage area alongside conservation, and that air access to Halls Island is more environmentally friendly than bushwalking through bogs and sensitive wetlands.

“It also allows us to share the wild places with a broader group of respectful visitors whom otherwise wouldn’t get to know and protect this place,” Hackett says.

Is any development in world heritage wilderness OK?

This goes to the heart of the dispute: whether any commercial development in world heritage wilderness – and any loss of the high-quality wilderness values that led to areas such as the Walls of Jerusalem national park being protected in the first place, no matter how small – is justified.

If it is – as the Tasmanian government argues – how much is OK? At what point of development is wilderness no longer wilderness?

The Halls Island proposal is currently before the federal environment minister, Sussan Ley, who last year found the proposal was on a scale that warranted assessment under the national Environment Protection and Biodiversity Protection (EPBC) Act.

Explaining her reasoning last September, Ley appeared to disagree with the Tasmanian government and Hackett that his proposal would have limited impact. She said the advice that she had received – which included the parks’ wilderness assessment – indicated the scale of impact on the world heritage area’s values would be “substantial”. But she stressed this did not mean her decision had already been made.

Her ruling followed public opposition, including from bushwalkers and fishers, and legal challenges. Ley used her discretion to order the assessment against the advice of her department, and effectively reversed an earlier decision made under the former environment minister, Melissa Price, that was overturned by the federal court.

The new parks assessment is consistent with an analysis commissioned by the Wilderness Society in 2018, and follows warnings from the Australian Heritage Council and the National Parks and Wildlife Advisory Council. The Tasmanian Aboriginal Heritage Council has raised concerns from a cultural perspective.

It also appears at odds with the parks agency’s consistent public support for the Halls Island development.

Allen says the government’s plan to allow private development in parks was flawed from the start. It called for expressions of interest, which were assessed by a panel against four criteria before being publicly announced as having government support.

He says the process lacked transparency and in some cases regulations had been watered down to allow developments to go ahead. In the case of the Halls Island development, the part of the world heritage area in which it sits was rezoned from “wilderness” to “self-reliant recreation”.

Among the Wilderness Society’s objections is its belief that “public land is being privatised for profit without transparency”.

Luke Martin, the chief executive of the Tourism Industry Council Tasmania, says the science of whether there is impact on world heritage areas is best left to experts, but critics such as the Wilderness Society and the Greens have an ideological opposition to any development proposal in parks. He says every plan is unique and should be assessed on its merits.

“We think there is a role for commercial development in national parks and the world heritage area,” he says. “Every form of human activity is going to have an impact on the wilderness values. It’s just a matter of how you can do that in a minimal way that has a minimum impact on the environment and allows people to experience these places.”

Martin is dismissive of claims the Halls Island proposal would be “the thin edge of the wedge” or that developments are being rushed through without transparency. “Seriously, look how long it has taken to get anywhere,” he says. “We are not seeing this massive onslaught of projects.”

The Liberal party says it remains committed to its policy. Through a spokesperson, it says its approach has “been very successful over many years in promoting Tasmania’s unique wilderness and nature-based tourism experiences on the world stage”, and that all proposals including that for Halls Island need to receive official heritage, environmental and cultural approval.

The Labor opposition, led by Rebecca White, did not respond before publication. The Greens say the parks assessment is “an indictment on the government” as it shows its policy would allow “damage to the very values that underpin the reserve”.

Vica Bayley, a Greens candidate and longtime environmental campaigner, says both the world heritage committee and state laws for managing national parks are clear that wilderness should be protected from developments such as huts and helicopters. “This new assessment demonstrates that those impacts are real,” he says.

He says the government has pushed “all the way” to approve the Halls Island development. “Now they have done this assessment the question is: what happens to it? The logical thing parks could so is review the current assessment, cancel the approval and strengthen the process to ensure it doesn’t happen again.”

Allen says the Wilderness Society’s position is that it supports nature tourism, but that development should be outside protected areas.

“But if Tasmania wants to be the ecotourism capital of the world it has to be serious about these things. It can’t go on the way it has been.”