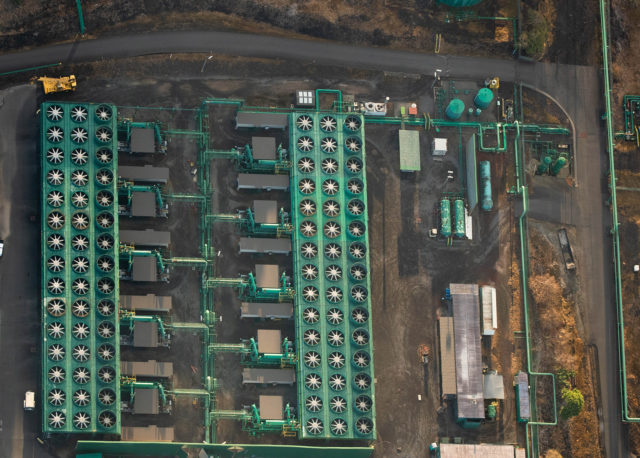 Hawaii island could be the first area in the state to exceed goals set by the Legislature and regulators for renewable energy.

Three large solar projects in the works on Hawaii island are bolstering the island’s renewal energy supply, so much so the island should hit 100% of its renewable energy standards by 2023, Hawaiian Electric Co. says.

The renewable portfolio standard, or RPS, mandates a certain percentage of a state’s electricity use or sales to be generated by renewable resources. The Hawaii Island grid is powered by a diverse mix of renewable resources including solar, wind and geothermal. Three solar projects and the return of Puna Geothermal Venture to full production should amplify the grid even more.

“I think we have this gem of an accomplishment on the Big Island,” Colton Ching, Hawaiian Electric’s senior vice president of planning and technology, said during a recent Hawaii Island Sustainability Summit. “And it’s going to be an even bigger gem in a couple of years.”

Already, Hawaii is at the top in terms of state standards.

The Big Island registered a 43% RPS last year, but that was without Puna Geothermal Venture. PGV, which produces electricity from geothermal resources in Puna, was sidelined after the 2018 Kilauea eruption caused massive disruption in eastern Hawaii.

Had PGV been operating normally, the RPS rate would have been 75%. Had PGV produced at higher capacity levels it is capable of – the facility is currently undergoing an expansion process – it would have been 82%.

By comparison, Maui registered about 41% RPS, while Oahu hit 25%, according to Hawaiian Electric’s 2019-2020 Sustainability Report.

Kauai, which operates its own grid, the Kauai Island Utility Cooperative, hit 56%, according to its report.

“It’s something to really be proud of, as an island and as a community,” Ching said. “Those are numbers that other islands, other states, other countries are just right now dreaming of achieving.”

It should get even higher.

With 120 megawatts of solar production and storage capacity under development now, Hawaii could hit 100% RPS by 2023 and move beyond that the following year.

The first two projects – AES Waikoloa and Hale Kuawehi – are currently in the design and engineering phase. A third project is awaiting Public Utilities Commission approval.

AES Waikoloa is a 30 megawatt solar photovoltaic facility combined with a battery energy storage system. Ching told Civil Beat that it received county plan approval and they are working on obtaining the remaining permits. Its contractor began site preparation for construction, and it is expected to be in service in November 2022.

Hale Kuawehi Solar is a 30 megawatt solar photovoltaic facility also combined with a battery energy storage system. It is expected to be in service in December 2022.

The third project is Puako Solar photovoltaic and battery storage facility. The power purchase agreement with ENGIE Development LLC was submitted to the PUC on Nov. 13, and is pending approval. If approved, the project is projected to be in service by Sept. 30, 2023.

“It’s something to really be proud of, as an island and as a community.” — Colton Ching, Hawaiian Electric senior vice president of planning and technology

When the company announced the additions last year, it said it would produce 206 gigawatt/hours annually, which is enough to power 36,000 average Hawaii island households and reduce carbon emissions substantially.

The Big Island is not as land constrained as other islands such as Oahu – wind and solar projects require vast acres of land, he pointed out. Also, collaborative work began early between communities, developers, and landowners, which has allowed development to get off the ground quickly. A diverse portfolio of renewables – wind, solar, battery energy storage, geothermal, biodiesel – also helps the island to achieve higher RPS levels.

Geothermal, a staple on the island, is a resource that provides a large amount of renewable energy as well, Ching said.

Prior to the 2018 eruption, PGV was providing over 38 megawatts of power, according to a company press release. Since coming back online in November, it is continuing to ramp up production, producing 20 megawatts of power with goals of hitting pre-eruption levels soon.

PGV is currently in the process of increasing production and extending its power purchase agreement with Hawaiian Electric, an agreement which is temporarily on hold pending a supplemental environmental impact review.

“Hawaii island has been able to lead the renewable transition, largely due to wind and geothermal,” Ching said.

With the completion of all the projects by 2024, “The RPS could exceed 100% on sunny and breezy days,” Ching added.