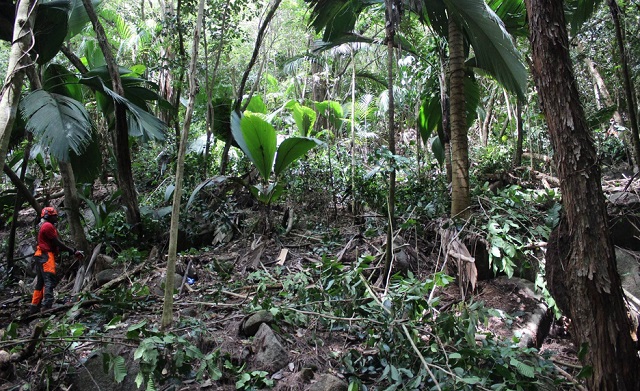 (Seychelles News Agency) – Seychelles’ biggest freshwater basin, the Mare–aux–Cochons wetland, is expected to be rehabilitated to enhance its water storage.

Work on the upland wetland located in the north of the main island of Mahe will start next month and is being done under the Ecosystem-Based Adaptation (EBA) to climate change project being implemented in Seychelles since 2015.

“The Mare-aux-Cochons watershed is the biggest river basin in Seychelles and home to the longest river in the country. That said, it takes its source in the hills of Glacis D’Antin and Sarcelle, snakes toward the wetland before going down through the geological fault of the national park toward Port Launay. The area is very rich in minerals and has several natural cascading dams,” Johan Mendez, a consultant of the project, told SNA recently.

The wetland is currently one of the main sources of freshwater being used by the island nation’s Public Utilities Company for potable water. Mendez added that rehabilitation is needed as the area is invaded by invasive alien species, especially along the nature trail. The invasive includes the albizzia trees, prune de France, cinnamon and bwa ber.

“It will be a forest rehabilitation, so selective removal of invasive trees to open up space for native trees that already grow under the canopy. There will be mostly planting of native palms and endemics such as Latanyen Lat, Milpat and Auban. Five thousand trees will be planted over six months, but mostly seedlings already in place will have the chance to grow,” explained Mendez.

The wetland, which lies within the Morne Seychellois National Park, was designated a Ramsar site – a wetland of international importance – in 2010. Two other sites in Seychelles also have this recognition: Aldabra Atoll – a UNESCO world heritage site – and Port Launay in the west of Mahe.

Mare–aux–Cochons lies in an area of outstanding natural value. The park’s most critical ecological community is the mist forest at higher altitudes and includes several other important habitats including intermediate altitude forest, riverine forest, open water pools, marshes and rivers, which are all priorities for conservation.

“The area is home to several potential sites for river water storage such as Bougainville, indeed the EBA project identified wetland site valuable for enhancement. This could support our national effort in sustainable development and also move toward less desalination plant for water supply,” added Mendez.

Work on the Mar-aux-Cochons wetland follows the successful rehabilitation of the ‘Dan Sours’ wetland at Bougainville, which now has a capacity of around 15 million litres of water.The Ecosystem-Based Adaptation is a project through which Seychelles – 115 islands in the western Indian Ocean – seeks to reduce its vulnerability to the effects of climate change. It is often referred to as the ‘natural solution’ to climate change. This approach recognises that healthy, intact, diverse and well-managed ecosystems provide abundant ecosystem services enabling people and societies to adapt to current climate variability and long-term change.