The 4th Ecological Symposium took place in the Greek island of Elafonisos from 4-6 June to disseminate best practices from insular territories and to explore investment opportunities for the island. While several institutional representatives from Greece and abroad were present in place, the entire event has been broadcasted live. Participating among the others: George Kremlis, Honorary Director of European Commission, in charge for DGENV of circular economy and islands, and Environment and Circular Economy Advisor of the Greek Prime Minister Kyriakos Mitsotakis; Iannis Plakiotakis, Minister of Maritime Affairs & Insular Policy; Panagiotis Nikas, Peloponnese Governor; Theodoros Veroutis, Vice Governor of Lakonia; the Elafonisos Mayor Efi Liarou; Eleftherios Kechagioglou, President of the Hellenic Small Islands Network;

INSULEUR George Assonitis Member of the Technical Committee of Enrico Toja, President of the Ecological Association of Elafonisos. Numerous other Greek islands mayors also took part either live or digitally. 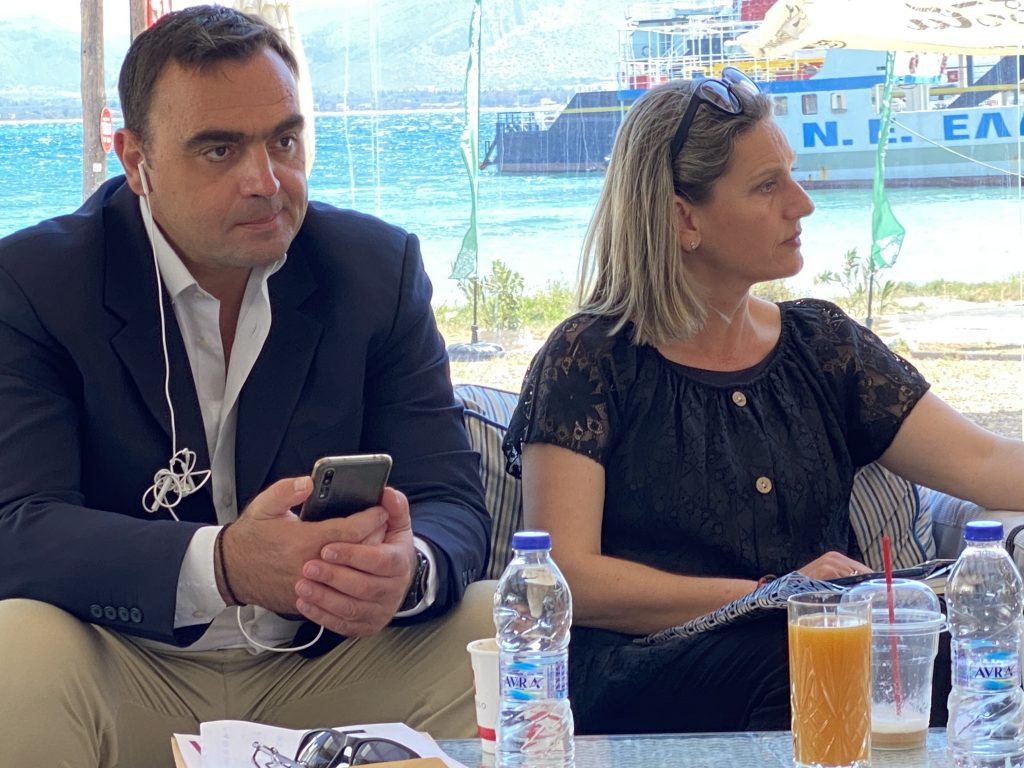 Mr Veroutis highlighted how Elafonisos will be the frontrunner island in Lakonia and Peloponnese for the sustainable transition. Mr Nikas communicated that he will take into account the acts from the 4th Symposium for the development plans of Elafonisos. Greening the Islands took part in the event presenting the lessons learned through the GTI Observatory and to strengthen cooperation with the Greek islands. Working with islands worldwide on a daily basis since 2017, the GTI Observatory has understood what their main challenges are and how those reflect on the mainland, as well as the importance of the nexus between water, mobility, agriculture, tourism, waste and energy in a concept of integrated sustainability.

Despite contributing only to a minimum extent to global carbon dioxide emissions, islands are disproportionately affected by the effects of climate change and also have to face a cost of energy up to 10 times higher than in the mainland with renewables still accounting for very low percentages of the total installed capacity in the power sector. But with the joint effort of public funding, policies, R&D and private investments, islands can become laboratories for testing innovative circular economy solutions and ultimately showing to the mainland the decarbonization path.

In the framework of the event, a partnership was signed between GTI and the Hellenic Small Islands Network. The two organizations will create synergies and consolidate their cooperation with the objective of promoting a sustainable island tourism, assisting the small islands, which have peculiar necessities, in becoming truly sustainable destinations. GTI will offer scientific and technical support to all Greek small islands through the GTI Observatory and the GTI Global Index.

Furthermore, GTI has begun talks to kick-off a collaboration on Greek islands – but to be extended on a global scale – with Zero Waste International Alliance, an international NGO devoted to designing and managing products and processes to systematically avoid and eliminate the volume and toxicity of waste and materials, conserve and recover all resources, and not burn or bury them.

“Three main projects are currently under completion in the island, centered on water and waste”, Mayor Efi Liarou said, “Elafonisos has in nature and natural beauty its principal assets and it is strongly committed to the sustainable transition.” During the event, the first Water Kiosk machine on the island was inaugurated. Through a system of reverse osmosis, the Kiosk improves the quality of the drinking water flowing in the island grid which all citizens can fetch freely.

Mr Kremlis, long-time member of the GTI Jury and key actor in promoting sustainability and climate change adaptation on islands, confirmed his support for all islands, in particular of Europe and Greece, and also highlighted how Greening the Islands is the voice of islands worldwide. “Islands are more vulnerable”, he said, “especially because of climate change, and that is why they should share their good practices. Islands can be leaders in sustainability and models for the environment for the rest of the world.”

The Founder and Director of Greening the Islands Gianni Chianetta commented: “With the GTI Observatory and other digital tools, our goal is to facilitate the origination of projects directed at the self-sufficiency and sustainability of islands. A lot has already been done and one of our main focal points is to help islands transition from a mass tourism to a more sustainable and ecological one, which respects the environment, produces less waste to be exported and less noise pollution, and benefits the local communities. The new edition of the GTI Awards, in fact, is going to dedicate special attention to this theme and, in October, will reward the best island projects on sustainable tourism, waste, energy, water, mobility, agriculture, governance and inclusion.” 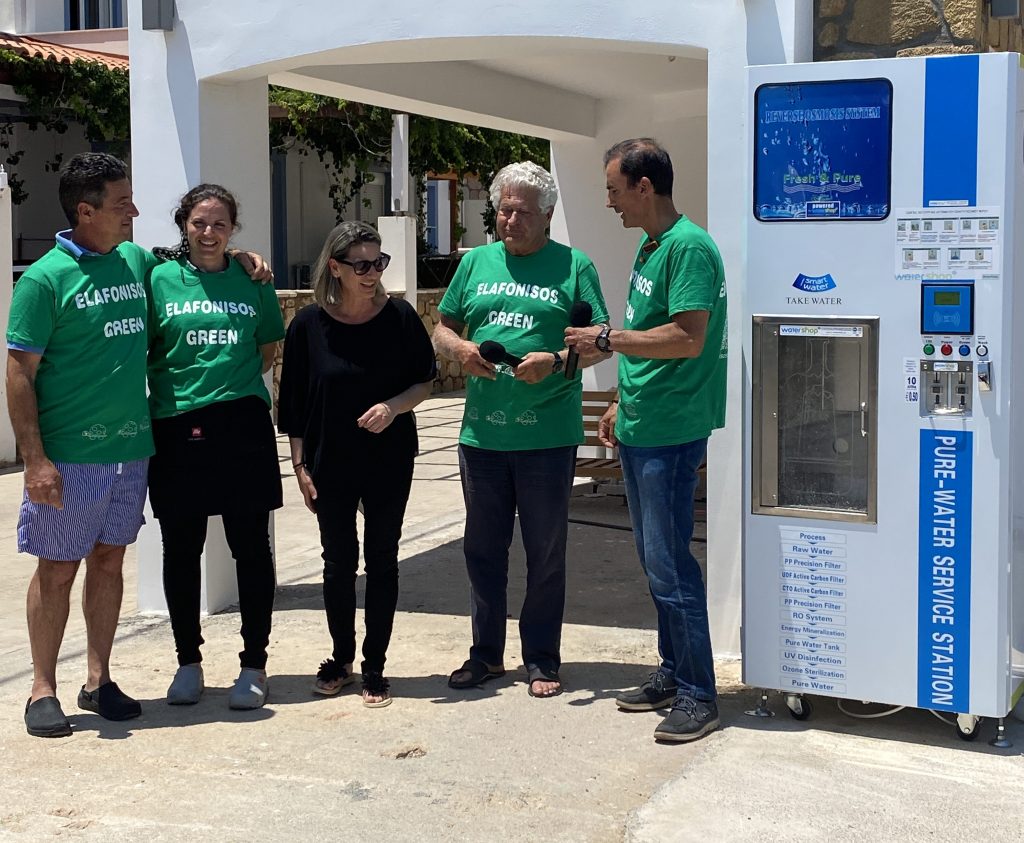 Elafonisos has already committed to becoming more sustainable, also through the recent application of the GTI Global Index. Preliminary results from the analysis of the data provided by the island identified the main issues being electricity production, waste and sustainable mobility. In the energy field Elafonisos showed already the right attention to eco-sustainability and should invest on island green energy self-sufficiency to enhance resilience and solve blackout issues. Waste is a crucial theme to be addressed: significant achievements are feasible with focused effort as witnessed by other case studies.

Highly promising projects are already underway to electrify the island, gradually moving away from gas, to encourage the penetration of e-mobility, and to boost the separated collection of waste. On the water side, a study is being conducted for a new desalination plant and the construction of a grid to cover the whole island currently underway. The authorities of Elafonisos and GTI will join forces to identify an overall strategy and create a plan of action to maximize the results to be attained.

Mr Toja commented upon the closing of the event: “I was very satisfied with the quality of the speakers and the content of their presentations. It was the first time that the Ecological Symposium was available on streaming with different remote presentations. The presence of the Vice Governor of Lakonia, the introduction by Elafonisos’ mayor, the message from the Peloponnese Governor, and the very encouraging speech by George Kremlis added a tremendous value to the audience. Also, the best ecological practices presented by the mayors of Astypalea, Lipsi, Andros, Kythera, Tilos and Serifos were very interesting. Greening the Islands, the Cultural Manager Paolo Verri, the Architect John Tsoukalas and Zero Waste Italy and Greece gave us a lot of inspiring ideas for the future of Elafonisos. Now we need to implement them.”