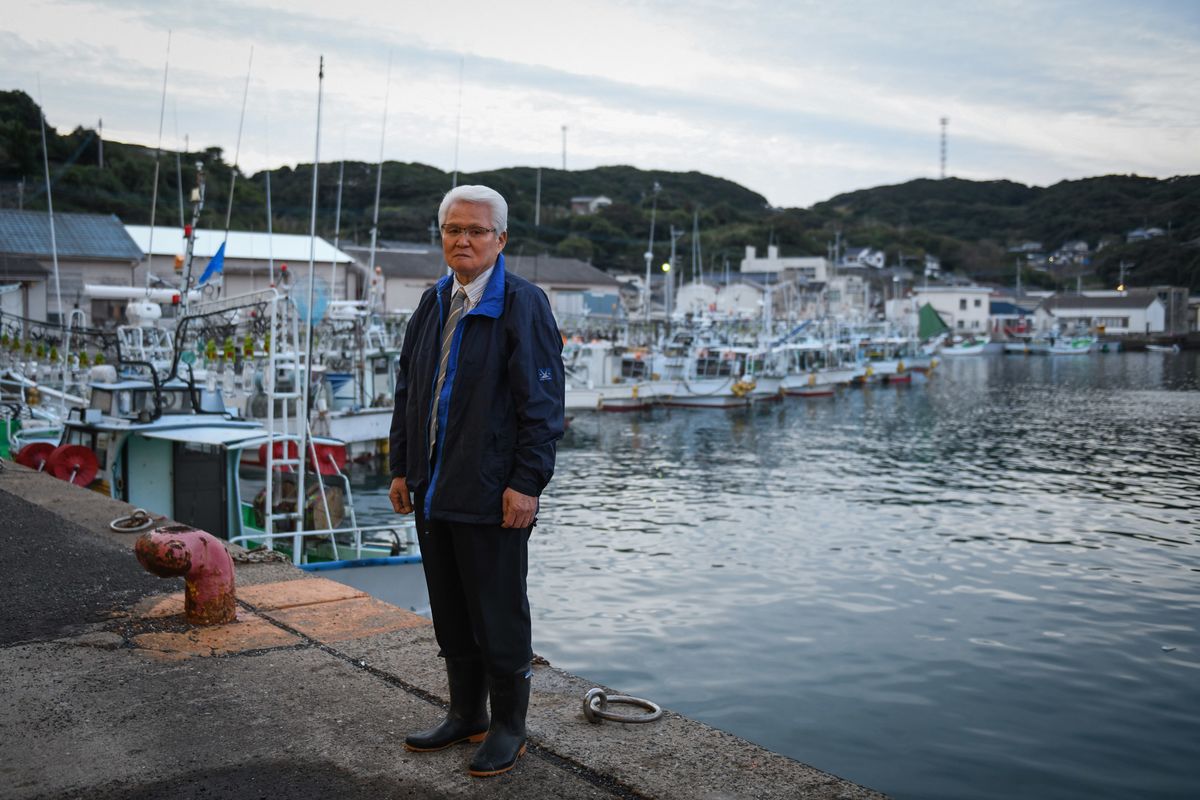 Global warming is already changing Iki, the first place in Japan to declare a climate emergency, and residents face some stark choices.

In the middle of the sea between Japan and South Korea, the waters around Iki may look pristine to the thousands of tourists who visit each summer, but for the islanders—the fishermen, farmers and free divers that gather abalone—the clear, emerald-green sea tells a more disturbing story, one of rapid decline in the seaweed and marine organisms that once fed vast shoals of fish.

Iki was the first city district in Japan to declare a climate emergency in 2019—a unique and beautiful ecosystem that has been thrown out of balance by global warming. Known as Lucky Island for its beauty and its location out of the path of Japan’s frequent natural disasters, Iki is now reeling from extreme weather events and the devastating effect of rising sea temperatures.

Climate change has already arrived here, forcing the islanders to choose between trying to maintain their traditional marine-based way of life, or to embrace big bets on wind and solar power that are unlikely to restore the island’s prosperity and could accelerate the destruction of its traditional economy. Iki is Japan’s climate nexus—an example of the paradox many rural communities around the world face as we try to rein in global emissions.

“It’s hell for us either way,” said Terutaka Okubo, 75-year-old head of Katsumoto Fishery Cooperative, the biggest of five on Iki, in his office overlooking the dock where daily catches are auctioned each day.

Years ago, the now clear waters were dark, thick forests of seaweed that fed sea urchins, abalone and fish. As the temperature warmed—by about 1 degree Celsius in the past few decades, according to the city—other fish species migrated into the area from tropical waters in the south, eating the seaweed faster than it could regrow.

One morning late last year, three fishing boats docked at Katsumoto port after sunrise and dumped their catch onto the concrete wharf. The fish were dead or barely alive, but the fishermen didn’t care. Most are invaders such as isuzumi—striped brassy chub that have little commercial value. A fisherman takes pictures of the haul to send to the government, which pays a bounty for each migrant fish that is caught and destroyed in an effort to stem the tide of destruction. Then the fish are taken to a freezer to join others waiting to be incinerated. In contrast, when a boat brings back a butterfish or a red snapper, the catch is carefully placed on a bed of ice in an individual box, ready to be sold.

“When I was a boy, there weren’t isuzumi around here,” says Okubo. “We are getting more and more southern fish.”

On the wall of Okubo’s office, old photos show the port in its heyday, with a parade of ships in the 1960s, 1,000 tuna offloaded in a day, 4,250 boxes of squid. Back then, boys from the ports skipped high school to become fishermen, Okubo among them. Few now want their children to follow in their footsteps.

“The water is completely different now,” says Tsutomu Shinozaki, a 54-year-old abalone diver, who couldn’t find even 10 of the prized shellfish in the six-month season through September. He remembers when he could get 70 in a day. “I don’t know how long I will be able to continue,” he said. Last winter, he took a construction job near Tokyo to make ends meet.

For Iki’s fishing fleet, there’s an irony in the decline of stocks. While fishing communities adopted unsustainable practices such as bottom trawling that wiped out shoals, Iki’s boats stuck to traditional pole and line fishing. “We never even discuss that path because we know our resources will be wiped out,” Okubo said. “It’s the biggest taboo for us. It may give us a one-off boost, but it will bring misery in the long-term.”

Japan’s total fish catch dropped by more than 70% between 1986 and 2019, according to the United Nations Food and Agriculture Organization, largely due to overfishing and climate change. For fishing communities like Iki, the decrease is exacerbating the problem of population decline as young adults leave to find jobs in cities. Iki’s population has halved since 1955, to less than 26,000.

One proposal to stem the economic decline is to invest in renewable energy. On Iki, farmland is being turned over to solar panels and a solitary wind turbine by the shore may be the harbinger of the island’s future. Wind and solar generate about 13% of the island’s power now, with most of the rest supplied by oil-fired generators, and Mayor Hirokazu Shirakawa wants to reach 100% renewable power by 2050.

“This is the frontline of the energy revolution,” says Tatsuo Nakahara, 76, whose eponymous construction firm runs the existing wind turbine and is bidding to expand offshore. “Let’s ride it and get wealthy together.”

Nakahara grew up on the island—as a boy he gathered and sold agar, used to make jelly, to buy a baseball glove. He made a fortune in construction during the post-war boom as the island built breakwaters and docks for the booming fishing industry. As the fisheries declined and the town lost people, he diversified into tourism, a nursing home and renewable energy. He’s trying to persuade fishermen that the wind farms won’t damage fishing grounds and could provide revenue to subsidize fishery cooperatives.

Studies of the effects of building and running offshore wind suggest that the noise affects the behavior of fish and other marine life, but there’s not enough data yet to determine what the long-term effects could be for particular species. Some fishermen on Iki worry that even the effects of construction, combined with the damage due to rising temperatures, could irreversibly reduce fish stocks.

Nor are they the only ones feeling the effects of climate change. Mayor Shirakawa, 71, the son of a rice farmer, says the rainy season that used to typically bring steady showers that watered crops has become more prone to violent downpours that cause flooding and landslides. “The weather has become extreme,” said Shirakawa. “The farmers know it well.”

A few kilometers inland, Kazuyoshi Nonaka and his wife Miyuki walk through farmland to a damaged greenhouse, accompanied by their dog Mameta, a rare Kai Ken breed. In September, against his wife’s advice, Nonaka had gone out during an approaching storm to check on the asparagus crop and had watched dumbstruck as the wind ripped off the roof of the greenhouse.

“I was stunned. I spaced out,” said Nonaka, 42, looking at the pipes sticking out of the wreckage. The storm cost him about 2 million yen, or 10% of his annual sales.

A 2020 report by Japan’s cabinet office says warmer temperatures are raising the amount of water vapor in the air, increasing the frequency and intensity of heavy rain.

Even if the wind and solar farms are built, they’re unlikely to bring back the lost fishing jobs.

“Only if fishermen make money will the town be lively and people come to shop,” said Matsuko Kido, 72, who has run a single-chair barber’s shop for more than 30 years in Gonoura, once the busiest town on the island. “But not many fish are getting caught.” Nearby, a shuttered pachinko parlor and other failed businesses testify to the island’s decline.

Some local entrepreneurs are hoping the island’s beautiful coastline, ancient shrines, and local seafood can lure tourists from the mainland.

“Iki doesn’t have many other thriving industries,” says Yoichiro Kawasaki, 44, who works at the Iki Dolphin Park & Resort, where visitors relax in an airy wooden café, eating pancakes made with local eggs and watching trainers coax dolphins to jump and perform.

“They’re our partners,” Kawasaki said. “They give us jobs.”

It’s a far cry from the 1970s, when local fishermen would cull wild dolphins because they ate the squid—one of Okubo’s old photos shows dolphin fins rising from blood-filled water.

But keeping Iki pristine for tourists also has its challenges. Iki sits in a channel between Japan, Korea and China, and some beaches are littered with cans, Styrofoam boxes and plastic bottles labeled with Japanese, Chinese and Korean characters.

“A lot of tourists come to Iki and I want it to be beautiful for them,” said 13-year-old Yuga Abiru, one of four dozen seventh graders who recently fanned out across a local beach to clear the litter as part of a lesson in caring for the environment. Abiru hopes one day to captain a cruise ship, but he’s disheartened by the amount of garbage the sea is washing in. “There’s no end to it,” he sighs.

Iki shows that the effects of even a small rise in temperature can have far reaching effects on the way of life in local communities that depend on nature, and create stark choices over how we will need to adapt.

“Wind power won’t restore the sea,” said Hisae Takeo, 73, one of the last of the island’s famous ama divers, who has gathered abalone and sea urchins each summer for half a century. “Abalones and other sea creatures are very sensitive. When the wind turbines go in, they will be gone.”

Takeo still dives, beginning and ending each season on a bluff overlooking the ocean with prayers to a dragon god, but she says the sea around the island is changing. Tidal currents have shifted, typhoons have become worse, and without the buffer of seaweed, waves have become stronger. The warmer water means she can dive for longer, but there’s less to gather.

“The sea is dead now,” she said. “At the bottom of the sea, it really feels like death.”