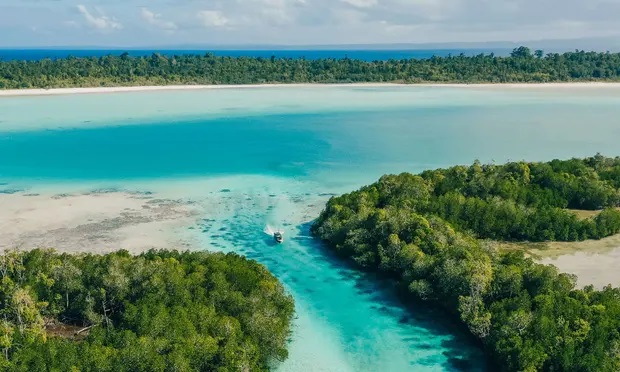 The development rights to an entire Indonesian archipelago with more than 100 tropical islands is set to be auctioned next week, sparking concerns for the environmental impact on what Sotheby’s described as “one of the most intact coral atoll ecosystems left on Earth”.

The uninhabited Widi Reserve is based in a marine-protected zone in the “Coral Triangle” area of eastern Indonesia, and will go on sale via Sotheby’s Concierge Auctions in New York from 8-14 December.

The sale of islands to non-Indonesians is banned under Indonesian law, so buyers will bid for shares in PT Leadership Islands Indonesia (LII), an Indonesian development firm that has licensed the rights to build an eco-resort and luxury residential properties on the reserve.

The auction has prompted concerns among some conservationists who say the development could cut off local communities and threaten its ecosystems, which feature rainforests, mangroves, lagoons, lakes and coral reefs that are home to vast marine life.

Mohamad Abdi Suhufan, national coordinator at Destructive Fishing Watch Indonesia, has asked Indonesia’s government to investigate the sale, which he said has caused “controversy and captured the attention of the Indonesian public”.

He said that although the development has planned for environmental protection, private ownership of the islands would “impact the local community socially and economically”.

“Fishing spots for fishermen that have been used for generations will be limited,” he said. “The social impact of this plan will offset the environmental benefits. Currently, the government is aggressively attracting foreign investment to obtain state revenue. No rules should be changed to pass this plan.”

Local environmentalist Iwan Sofiawan said: “How can it be guaranteed that these islands will not be exploited for tourism activities? And how about access for the local communities after the islands become privately owned?”

Spread out over 10,000 hectares (25,000 acres) north-east of Bali, a Sotheby’s representative described the islands as “one of the most intact coral atoll ecosystems left on Earth and an animal kingdom of epic proportions, home to hundreds of rare and endangered species,” among them blue whales, whale sharks and “species yet to be discovered”.

Asked about the environmental concerns, Charlie Smith, Sotheby’s Concierge Auctions’ executive vice-president, told the Guardian via email that development firm LII would be “actively involved, not just handing over the entire project”.

He said the company’s plan touches “less than 1 per cent of the rainforest” and “0.005 per cent of the entire reserve”, with no-go areas for tourists and spaces that cap the number of guests.

LII has budgeted US$1.5m in its first year for security patrols, supported by the police and navy, he said, and research programmes would be underway in the second year.

Like similar ecosystems, “the reserve has long been under pressure from shark finning, deforestation and the poaching of endangered species; left untouched the pressure on the reserve will only continue, and likely increase,” he said, adding that the business sector had “a vital role to play”.

Included in the development plans is a private airstrip that can serve guests from destinations such as Bali, Jakarta, and Cairns.

“Every billionaire can own a private island, but only one can own this exclusive opportunity spread across 100-plus islands,” said Smith in a separate press statement.

Near the reserve, cold, nutrient-rich waters are pushed down the bottom of an underwater mountain chain that connects to the Mariana Trench, the deepest oceanic trench on Earth. It makes, according to the auction listing, “the perfect birthing, mating and resting place for the hundreds of rare and endangered species”.

While the listing does not state an expected starting price, bidders are asked to put down a US$100,000 deposit. Bidding opens at 4am (ET) on 8 December, with the winner required to invest “a substantial amount” into the development, said Smith.