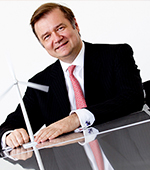 Mr. Re Rebaudengo has been managing renewable energy assets for over 20 years: his company, Asja Ambiente Italia, which he set up in 1995, is leader in its field in the Italian market and operates internationally, with offices in China and South America, in the production of renewable energy and reducing greenhouse gas (CO2) emissions, in accordance with the Kyoto Protocol. Asja is also active in the research of new technologies for the environment and since 2008 is present in the Business Research Center of the Politecnico di Torino. The Group also operates in the field of energy efficiency and microcogeneration with TOTEM Energy. From 2011 to 2017 he has been Chairman of assoRinnovabili, the largest Italian association of renewable energy producers that in April 2017 merged with Assoelettrica to create Elettricità Futura, the main association of the Italian electric world, of which he is Vice President. Since 2012 he is a board member of WindEurope (before called “EWEA – European Win.