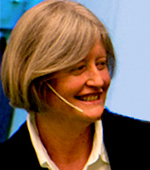 She writes about economic issues, technological innovation, energy and environment for various newspapers, including the Corriere della Sera, Il Sole 24 Ore and the Quotidiano Nazionale.
She has worked as a correspondent in Europe from 1987 to 1997 and then in the United States from 1997 to 2001, describing the birth of the New Economy and of the dot-com bubble burst.
Since 2001 in Milan, she has followed the liberalisation of the European energy market and the growth of new renewable energies, with a specific interest in issues related to sustainable development.