MAKING THE CIRCULAR ECONOMY AND SUSTAINABLE TOURISM A REALITY ON ISLANDS:
BUSINESS MODELS AND FINANCING OPPORTUNITIES

FIRST REPORT OF GREENING THE ISLANDS OBSERVATORY
The island dimension in the National Energy and Climate Plans (NECPs).
The feed in tariff scheme promoting renewables from diesel saving goes live in the Italian islands.

At the opening of the international event the first report of the Greening the Islands Observatory will be presented, which includes a general analysis on the European islands on circular economy and sustainable tourism and a deep dive on Crete, the Italian Egadi archipelago and the German island of Helgoland. A debate will follow on the results of the study and on opportunities for public and private financing with particular reference to the projects and initiatives that will have been identified on the mentioned islands.

The second part will involve the European institutions and industrial associations on the subject of National Energy and Climate Plans (NECPs) and the role of the islands. The event in Palermo will be an important step in the roadmap of the multilateral islands dialogue table with the European institutions launched by the CPMR Islands Commission and Greening the Islands with an event held in Brussels on June 18th with the support of the Committee of the Regions, where a joint declaration has been presented containing some of the key points that the table asks to be included in the NECPs.

This year, Greening the Islands international conference is organized in the framework of the General Assembly of the CPMR that will see the participation of over one hundred regional and island governments and will be followed, on October 16th, by a CPMR seminar on the circular economy. To visit the event’s website click here. Greening the Islands will take part in the CPMR seminar to which all participants in the GTI conference on October 15th will be invited.

The 6th edition of Greening the Islands International Conference will be preceded by the National Conference, 4th edition, that will review all the incentive tools and tenders made available by the Government and now operational, starting with the Minor Islands Decree (feed in tariff for renewables for non-interconnected islands) and calls for innovative pilot projects of the Ministry of Economic Development, and funds from the Ministry of the Environment for energy efficiency and mobility projects. A debate will follow on their functioning, possible business models and investment opportunities for citizens, businesses and private funds and their impact on tourism and the economy of islands.

The 5th edition of the greening the Islands Awards, chaired by an international jury, rewards the best innovative projects of islands on circular economy and sustainable tourism.

See all projects of the GTI Awards 2019 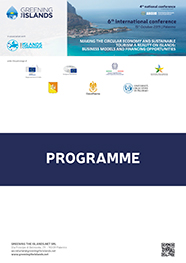 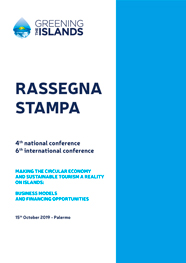