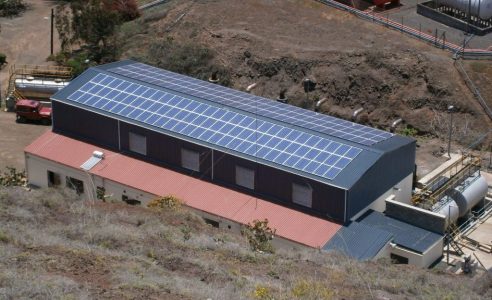 Winner for the category Energy

Project objectives:
To become 100% self-sufficient through renewable energy by 1 April 2022. This will be achieved through a mixed model of renewable energy production and storage and a targeted strategy to reduce demand through greener more efficient products and practices.

St Helena was until the recent opening of its airport, one of the most isolated islands in the world High fuel and transport costs combine to make energy costs on St Helena a huge challenge in an aid dependent economy.
St Helena’s strategy for 100% renewable energy by 2022 will make St Helena the leader amongst UK Overseas Territories. Using a combination of solar, wind and storage St Helena intends to reduce its reliance on fossil fuels, high import costs and volatile market prices.
The first phase of the strategy was put into operation in 2014 and 2015 through the expansion of the wind farm and construction of a 0.5MW solar farm. This took overall renewable electricity generation on the island from 9% produced by a windfarm initially constructed in the late 1990s, with expansions in 2009 and 2014 to 29% in the summer of 2015. This has had a major impact on the security of supply on the island and had a positive impact on the otherwise heavily subsidised energy utility.
A Power Purchase Agreement (PPA) is currently being finalised. Phase 2 will develop a 1.5MW + 1656kWh power solution based on Solar PV (500kW), Wind (1MW) and battery storage (1656 kWh). A load management control systems will be used to ensure power can be supplied without interruption.
The PPA is currently under contract negotiation and construction will start on site later in 2018. The agreement will develop, finance, build and operate the solution by mid 2019, with a view to ramp up power output capacity annually depending on the Island’s requirement up to 5MW.
This will take renewable electricity generation to 85% by the end of 2019. The Energy Strategy for St Helena is to become 100% self-sufficient through renewable energy by 1 April 2022.
In the on-going renovation work of affordable government-owned housing, solar thermal systems are installed now as standard practice replacing examples in the past of families heating hot water over open fires outside for washing. Measures to support energy efficiency have been taken for example by lowering import duty for energy efficient consumer goods, improvements to public transport and emissions-based vehicle import duty and road tax and reducing duty for renewable energy products.

Early informal engagement has taken place with private sector interests to explore opportunities to promote the market for energy efficient and environmentally friendly products on the island and a partnership approach has increased availability of locally produced food, more affordable energy efficient appliances etc. Local businesses have also been instrumental in ideas development for a 100% renewable concept for the island.
There was active consultation with the community in the development of the energy strategy with councillors leading constituency meetings, other community meetings taking place and a focus group providing input into the plans. The plans were also actively discussed in the local media.
Community liaison and public meetings took place at the start of the solar farm development, taking particular care to engage with local community organisations potentially affected by the development plans.
Interest in the environment is generally relatively high in the community with a strong sense of identity with the physical environment and a great national pride in the endemic species of the island. Utility company Connect Saint Helena Ltd. has also worked actively with communications, not least with regard to water management as the island has been twice in water crisis in recent years. This is bringing the global issue of climate change home to the local community. A pilot project is underway looking at ecological engineering solutions by developing the endemic cloud forest to increase water capture and biodiversity as part of a 20 year sustainable water strategy to address water security and climate change.
Energy is a relatively new area for environmental education and awareness on the island. Against this background of environmental interest in the community, however, and the fact that the local challenges and benefits are so clear, there is strong support for the shift to renewables with clear socio-economic benefits as well as environmental improvements. The increased investment in renewables presents an opportunity to engage the community in also understanding the links between the local environment and global challenges.

The broader economic impacts are harder to quantify. For an island just opening itself to niche tourism these benefits can be significant. The next chapter in the island’s history building on improving lives for the local community and building a robust economy that protects environmental value and cultural heritage is clearly significantly strengthened by a 100% renewable energy system.

Once fully operational, the project will displace approximately 2,300 Metric Tonnes of diesel. This is the equivalent of about 5,240 tonnes of CO2 or approximately 1.2 tonnes per capita of the island’s population. There is also a potential CO2 saving on freight of fuel to the island if this is calculated purely on decreased tonnage of fuel freight needed. This would be the equivalent to approximately 285 tonnes CO2. Together these figures total 5,525 tonnes CO2 or almost 1.3 tonnes per capita.
In addition to the positive effects on global climate impacts the transformation to renewable energy also brings local environmental improvements. Local air quality in Rupert’s Valley where the generators are located close to the local community will improve as a result. Risks to the community and the environment associated with diesel transport and management will also decrease significantly. Fuel is currently off-loaded by floating pipeline from a moored tanker, a practice that has significant risks. A leak from the on-shore pipe in 2014 was close to having major impacts. The marine environment around the island is unique, home to many endemic species and new species are being discovered on a regular basis.
Environmental impact assessments are being undertaken to ensure construction and operation of renewable energy technologies does not have a negative impact on the island’s unique flora and fauna not least with regard to the endemic wirebird.
Removing diesel reliance also frees the island from global market fluctuations thereby securing more affordable and predictable prices for the long term and over time bringing about a relative decrease in costs to the consumer. More affordable energy is an important equity issue in a low-income aid dependent community.
New employment opportunities are a direct result of the investment and the local community will be up skilled to allow them to undertake higher grade jobs. Indirect benefits can see financial savings channelled into other investments for the benefit of the local community in infrastructure, environment and socially focussed services. The 100% renewable energy system also enables significant public savings for reinvestment for community benefit.