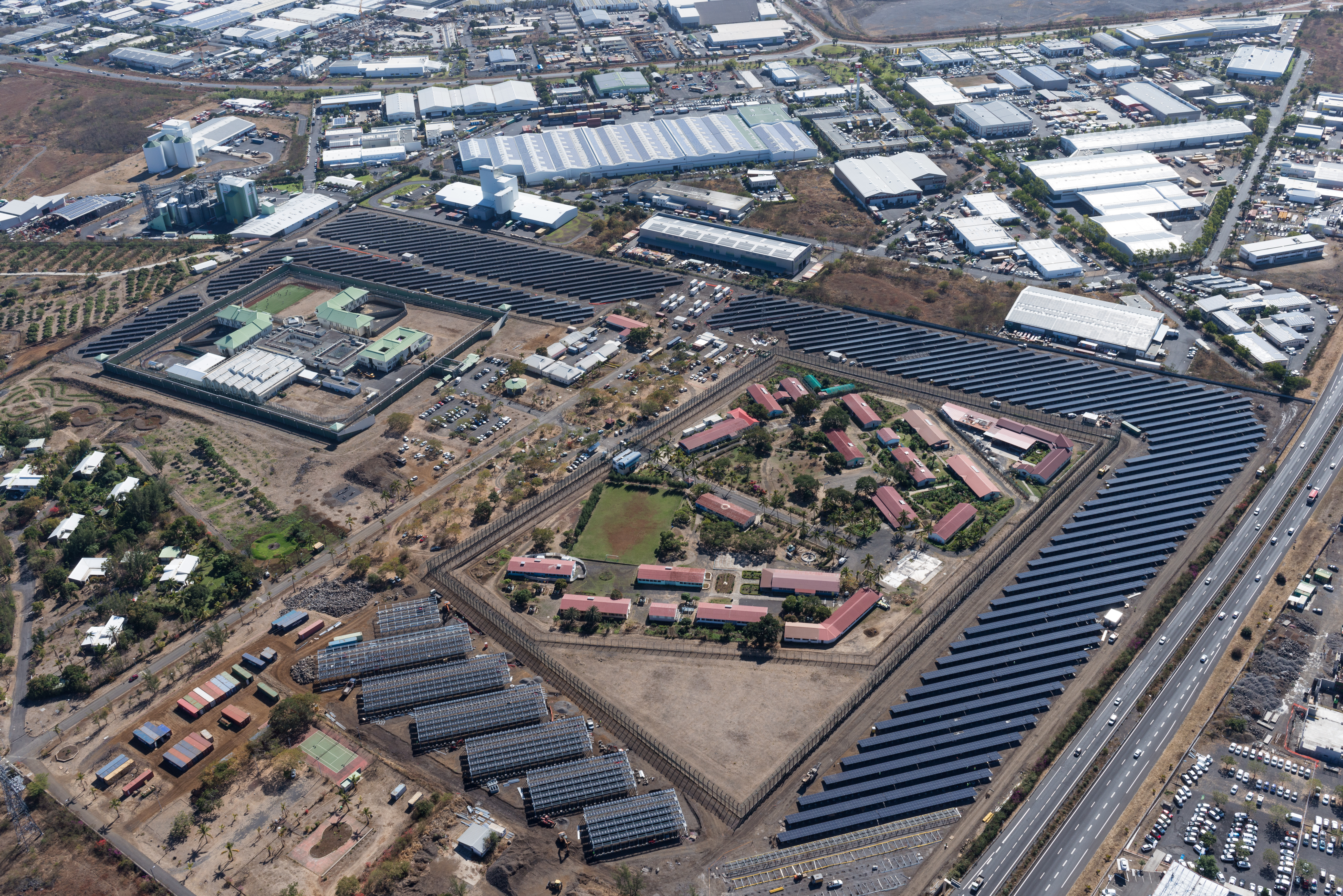 Budget / cost of the project:
31 millions € – The project won a call for tenders and was entirely financed with private funds.

Project objectives:
The project Bardzour fosters sustainability and autonomy of La Reunion, by creating local and green streams for electricity generation & storage and for agricultural production, in line with Agrinergie® principles. Located in a prison, it also holds a social purpose, by promoting reinsertion through professional training.

Project description of activities and specific interventions:
Bardzour solar farm is the first of its generation to include lithium ion battery storage with capacity of 9 MWh, a world first for this level of power when it began operations in 2014. This storage helps support the grid, thanks to stable and continuous electricity supply. With total power of 9MWp, the project incorporates 8.4MWp of ground-based panels located in the no-man’s-land of the Detention Center in the village of Port, in the west of the island, and 0.6MWp installed on 6,000m₂ of Agrinergie® greenhouses. Bardzour has been involved in an ambitious prisoner rehabilitation program: during the construction phase, prisoners nearing the end of their sentences were trained to build photovoltaic units.

Agriterra, Akuo Energy’s agricultural partner, also continues to work with six prisoners on the site, training them in low-input horticulture in the Agrinergie® greenhouses. The produce from the project is sold on the local market, creating a short supply chain. Permaculture techniques are used in certain key parts of the site, complementing the training received by prisoners. Training in beekeeping has also been provided for a dozen detainees, in partnership with Fondation Akuo. A 2-hectare arboretum of local and indigenous plants completes the set-up of this most unusual project.

Public outreach, education and awareness efforts and results:
Bardzour has a strong public outreach as it is a flagship project for tomorrow’s energy and agriculture management. Bardzour was a prizewinner in the My Positive Impact campaign run by Fondation Nicolas Hulot in 2015, which brought a strong visibility and helped raise awareness about environmental issues and solutions for the future.

The project was also selected to be one of the key features in Demain (“Tomorrow”), a documentary that presents a world tour of solutions to build tomorrow’s society, which made more than 1 million entries in France, was distributed in 27 countries, and won the Cesar of the best documentary.

Agriterra maximizes local benefits by organizing trainings in permaculture for Reunionese farmers, one of which was animated by Charles-Hervé Gruyer, French specialist of permaculture. Moreover, local schools are regularly welcomed to sensitized children to the stakes of energy and agricultural production.

Economic value added and how calculated:
The solar plant lowers the island’s dependency to fossil fuels and therefore secures electric production at a fix and lower price. Its economic balance is improved by the storage unit, that cancels out the effects of intermittence of solar power caused by weather conditions.

The economic value-added of the farm lies in higher production of better quality in less land. Production is boosted by permacultural techniques, that provide higher yields per square meters, estimated at ten times more than conventional agriculture. Moreover, the products from permaculture are entirely organic, giving them a higher economic value.

– The solar plant lowers the island’s dependency to fossil fuels and greens its electrical mix. Since it began operations in 2014, Bardzour have covered the electrical needs of more than 4.000 households each year, therefore saving 8.868 tons of carbon emissions annually. Moreover, in an island characterized by high land pressure, the solar plant valorizes unused lands (prison no-man’s-land);

– The implementation of Agrinergie® greenhouses has allowed regeneration of used soils. Agriterra, in charge the agricultural part of the project, has developed permaculture techniques adapted to the tropical climate to bring back biodiversity in previously under-valorized lands. The philosophy behind permaculture sticks to the objectives of the project. The techniques developed increase yields compared to traditional agriculture, which allow a better supply for the local market. Moreover, these techniques generate a growing biodiversity, therefore making the island more sustainable;

– The project has also implemented a 2-hectares arboretum gathering local and indigenous species.

The social outcomes of the project benefit essentially to the inmates of the prison of Le Port:

– The prisoners have been employed on the site during its construction: more than 15,000 hours were dedicated to training for inmates, giving prisoners nearing the end of their sentences skills in the construction of photovoltaic units;

– 12 prisoners have received a formation to beekeeping with our partner;

– Agriterra continues to train and work with 6 to 12 prisoners per year, to provide them with training to the agricultural techniques of tomorrow.