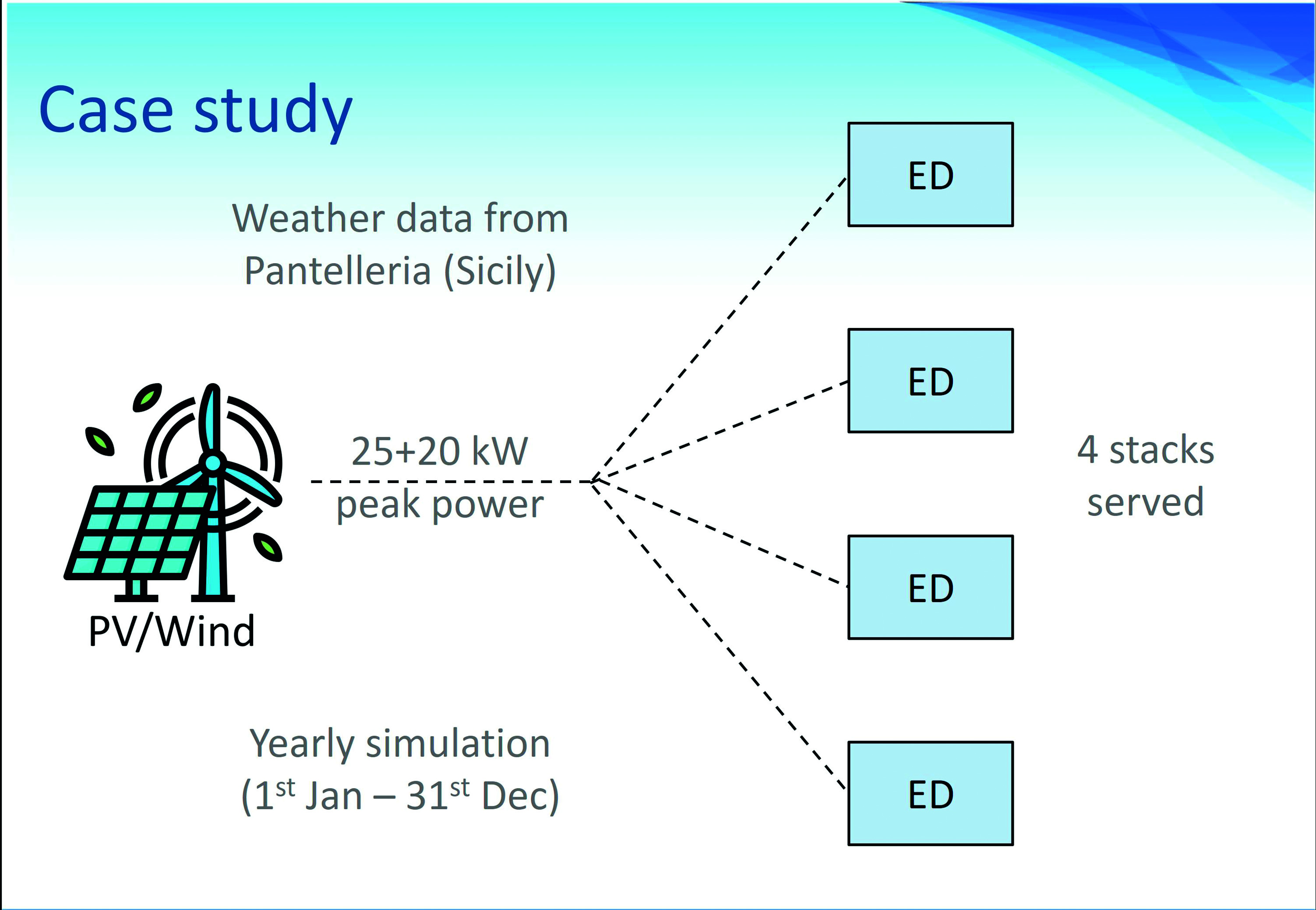 The objective of the project was to propose an electrodialysis (ED) desalination plant directly powered by an hybrid photovoltaic/ wind turbine system, without the presence of an intermediate energy storage. The ED unit can in turn be used as drinking water production device as well as salinity gradient energy storage system. The main aim was to prove that, conversely to reverse osmosis, the ED process characteristics are particularly suitable for direct connection with fluctuating energy sources.

Process simulations were performed in order to study the applicability of the combined system. A particular case study was analysed, where a PV/Wind system with 45 kW of peak production served 4 electrodialysis stacks placed in parallel. The stacks treated a brackish water source of 5 g/l Nacl in order to produce drinking water at 0.25 g/l. The flowrate of produced drinking water depends on the available power.

An entire year of operation was simulated, proving the exceptional flexiblity of the desalination plant that is able to produce from a minimum of 230 m3/d to a maximum of 920 m3/d, while being switched off (when the power available is too low) for a non continuative total of 2 months.
Particular attention was payed to the short time scale dynamic behaviour of electrodialysis, as it represents one of the critical aspects of the combined system. A feedback control system was designed, in order to maintain the desired product concentration by changind the feed flowrate based on the power production of the renewable energy system.
Dynamic simulations on the daily time scale where finally performed in order to test the efficiency of the control system, showing fast and stable responses to wide changes in power, that led to negligible fluctuations of the outlet concentration over time.

The economic added value was estimated in terms of cost saving comparing the difference in costs of the aforementioned ED plant powered by the renewable energy source with the cost of an RO powered by the same energy source that includes a battery as energy storage device. This, results in 18% cost saving, corresponding to 0.08 €/m3 of produced water.

This study aimed at building awareness of the potential of combined renewable/desalination systems without storage devices. In addition, the analysed system can potentially represent an efficient drinking water source for more that 1000 people every year. 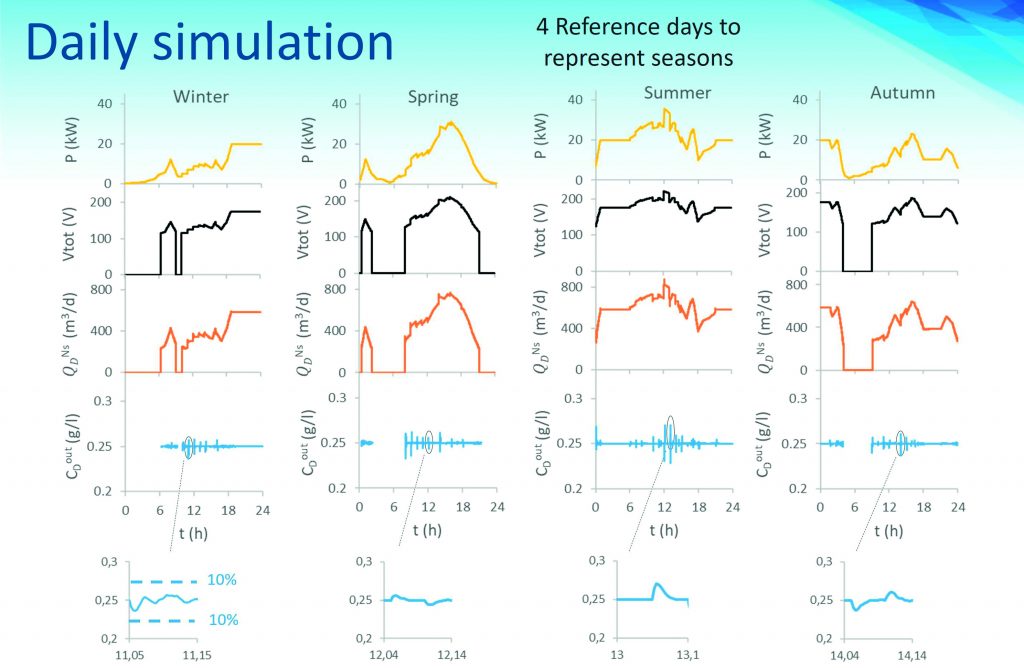 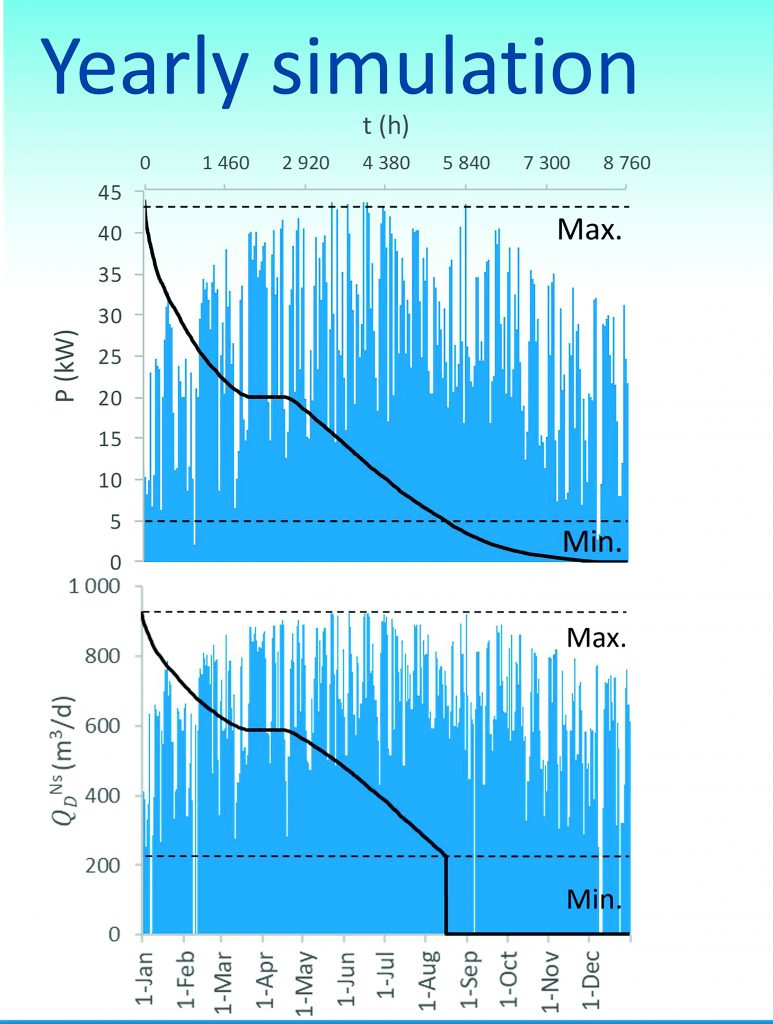