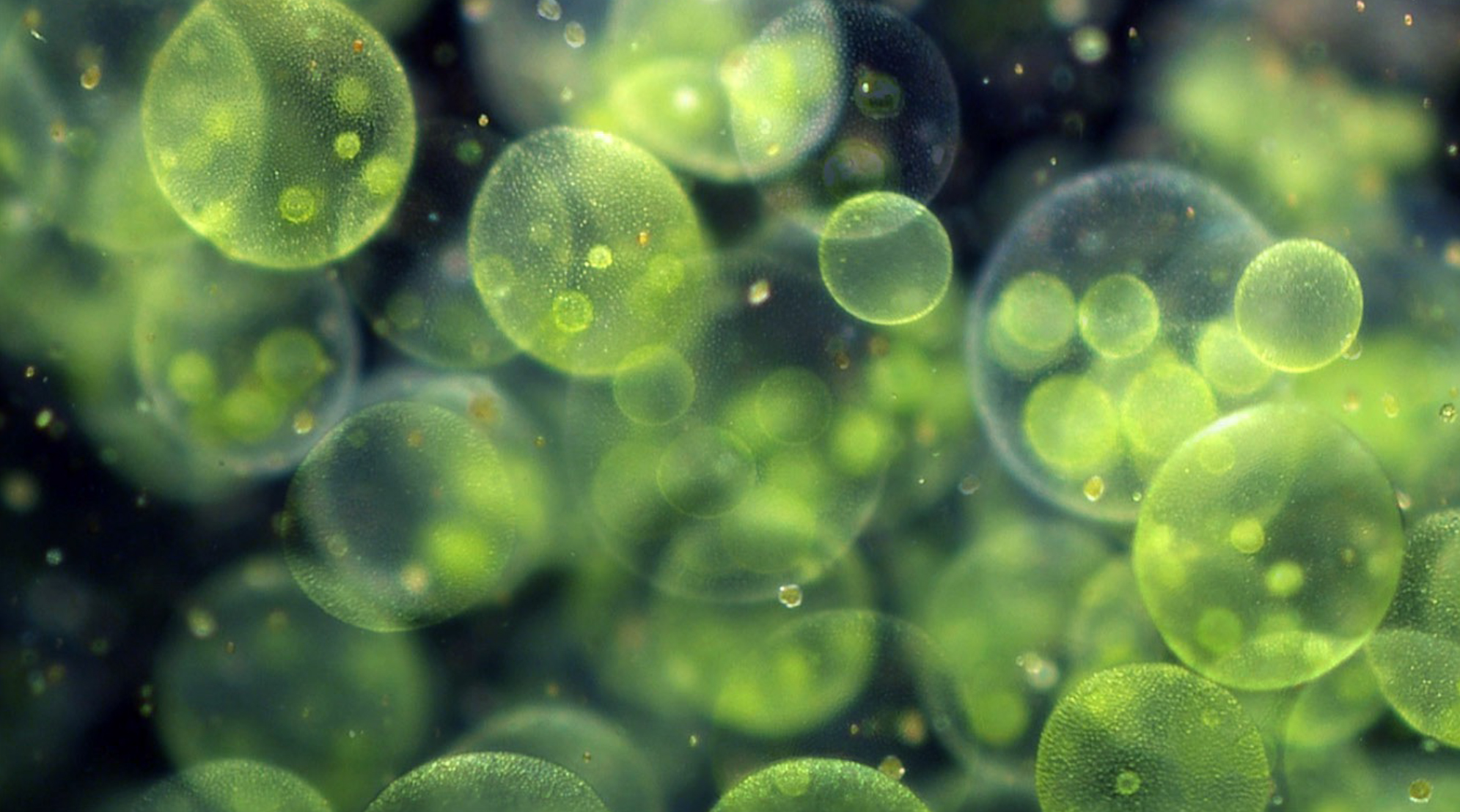 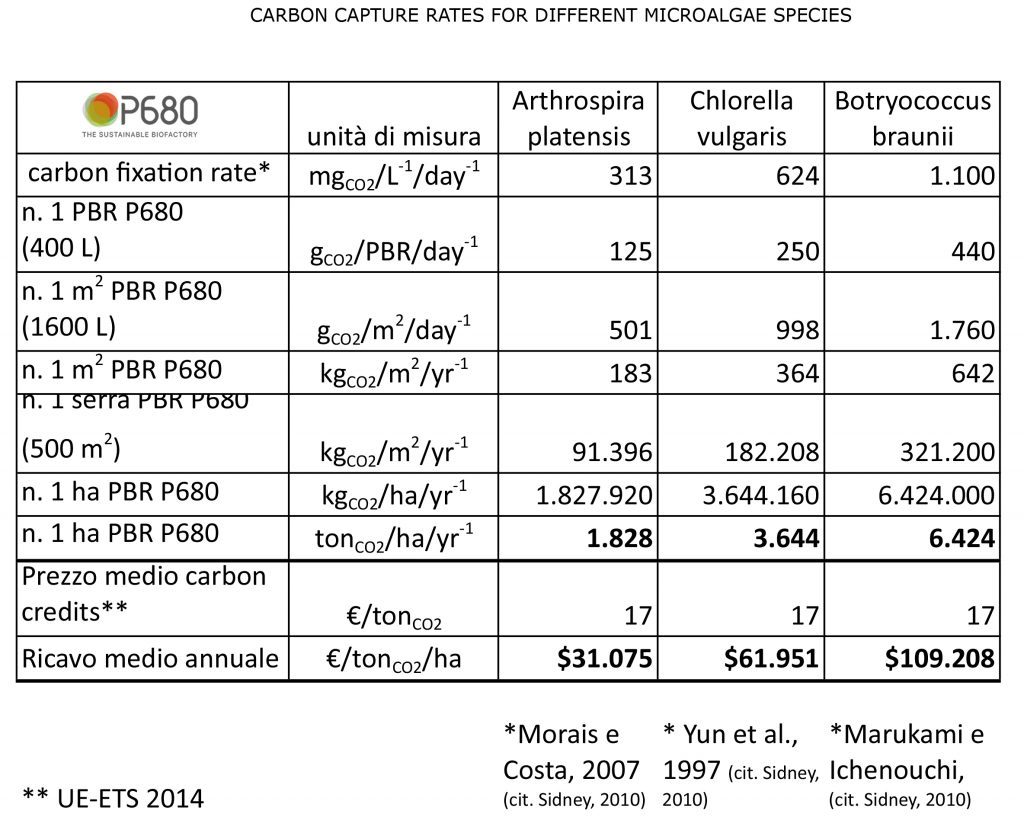 Project description of activities and specific interventions: The project is implemented by P680, a small biotechnology company, in partnership with the Istituto Sperimentale Italiano Lazzaro Spallanzani (ISILS), responsible for the selection of microalgal species of greatest nutraceutical interest and carbon sequestration efficiency for the definition of growth protocols and biochemical characterization of the final products. In a floristic company in crisis have been recovered two greenhouses of about 500 m2 each: a cold tunnel and a glass-steel greenhouse with controlled air conditioning, inside of which was set up a plant for the growth of microalgae in photobioreactors. The growing plants are composed by 40 polyethylene transparent bags of 400 liters volume water each. These vertical structures are illuminated by sunlight and inflated by atmosferic . The choice of closed photobioreactors derives from the need to avoid contamination of other algal strains, microbial or fungal that may affect the degree of purity of the cultivation and the yield of the active compound to be extracted. The cylindrical shape alsopromotes a beneficial ratio surface/volume so that the entire bio algal mass is invested by sunlight while avoiding shadow cones. The movement of the mass of water occurs through an air-lift system which allows supply of CO2 and at the same time avoids mechanical stress to algal biomass that could compromise growth. The arrangement of cylindrical photobioreactors in north-south direction and in vertical position with the white colored base will also optimize the exposure to light of algal biomass.
Greenhouse environment also allows biomass to grow in a highly controlled environment, where temperatures that should be maintained as close as possible to the optimum for the growth of the strain of interest. Periodic cells number count toghether with pH, T mesasurement are performer to control growth dinamics. Periodically an amount of the culture is withdrawn, filtered and concentrated and the resulting biomass is subjected to low temperature drying to obtain a stable product. After filtration water rich in nitrates and nutrients is not discarded but used for inoculation of new photobioreactors, obtaining further sustainability by responding to EU Nitrate regulation

The project aims to demonstrate the validity and feasibility of sustainable biofactory model for microalgae production for both the production conversion of an agricultural sector in crisis (floriculture) and for improving the environmental performance of farms with high environmental impact (feeding and livestock breeding agricultural companies). The same model is also applicable to the industrial sector close to sources of emissions into the atmosphere (steel and metallurgy compagnie, waste thermovalorization, fossil energy powerplants) through its downstream integration in the production chain, contributing to climate change mitigation within the mandatory and voluntary emissions markets. Plants of small capacity can also be applied to the service or public sector, to offset the emissions generated in situ from a single building or of a single company, with interesting marketing results (two pilot side projects are in progress).
The dissemination of project outcomes has different targets:
a) floriculture and agriculture
b) industrial sectors (greenhouse gas emitters)
c) service sector
d) category associations
e) individual consumers or organized purchase group (particularly with regard to bio-products derived from microalgae with food safety, sustainability and renewability, supply chain traceability features)
Particular attention is given to schools and young people: through collaboration with the TCCC student association (Teens Concerned about Climate Change) is being developed a side project of secondary schools with students’ involvement in lectures, screenings, students’ active involvement and placement of “Landmark photobioreactors” in schools (or even emissions offsets of schools buildings).

a) the italian floristic sector suffers from more than 10 years a structural contraction of the market: the massive presence of imported product on the European market and the low level of domestic demand have led many Italian companies to abandon, partially or totally, the culture or reconvert cultivated land for real estate speculation. Analysis of market ‘s structural dynamics clarifies the urgency to identify potential production conversion solutions. Only in Lombardy Region the floristic sector is an important productive and economic reality, with about 6200 hectares of greenhouse cultivated areas: the productive conversion of 10% of these technology-ready facilities could generate revenues of approximately 4.5 M € (calculated on average biomass productivity of 38 cultivar of Chlorella sp – Hempel et al, J Appl Phycol, 2012 – and medium market price for Chlorella dryed powder)
b) The agricultural sector in Lombardy has really large dimensions, both for crop cultivation (about 6M ha) and cattle breeding (about 5.5M head); these activities generate large amount of waste and sewage representing an ecological problem. A partial solution to this problem is represented by biogas production plants (Lombardy is the italian leader with 361 installations): cogeneration, however, emits large amount of CO2 into atmosphere. The recovery of this greenhouse gas through microalgae production plants installated near biogas installations (single farms or collective plants) would generate carbon credits revenues of about 60,000 €/ha/y and biomass revenues of about € 75,000/ha/y (calculated on average carbon fixation rate of Chlorella sp -. Morais e Costa, 2010 – and the average price of ETS carbon credits in the EU market)

a) land use: the use of microalgae as animal feed could free up a significant share of the world’s agricultural land currently committed to feed production by replacing high-environmental-impact crops, such as soybeans, and reducing global concentrations of atmospheric carbon to pre-industrial levels by the end of the century (Walsh, IIASA, 2015)
b) emissions reduction: one potential solution for removal of carbon emissions is to capture it in plant biomass; agricolture normally operates with an efficiency well below 1% of annual solar radiation converted into biomass harvesting. Furthermore, in conventional agriculture the fossil energy inputs may bring down the effectiveness in the reduction of fossil CO2 by the use of biomass as an energy source (Pimentel and Patzek, 2005). Advantages of microalgae mass cultures versus higher plants are the speed of growth and increate photosynthetic efficiency (10 times greater than that of terrestrial plants)
c) natural sources of Omega-3 are mainly two: fish and algae, with fish dominating the market; the availability and quality of this source has declined significantly, due to the crisis in fish stocks: currently the human population consumes more fish oil than ever did before, and demand now exceeds supply. One of the most interesting alternative sources are the omega-3 of vegetable origin; the ones produced by microalgal species in particular combines several advantages: safer, more controlled (no contamination of marine food chain by pollutants such as heavy metals); higher yield than other vegetable oil crops; no additional predatory pressure on marine fish stocks
d) water quality: the Nitrates Directive (1991) aims to protect the quality of water in Europe by preventing pollution of groundwater and surface water pollution caused by nitrates from agricultural sources and promoting the use of sustainable agricultural practices. It is clear that the project, favoring the almost complete reuse of water in the system and engaged the absorption of nitrogen and phosphorus by microalgae, determines a strong positive impact in the management of nitrates in the effluent of the plant and reduced dispersion in the environment thanks to the minimal amount of water refill