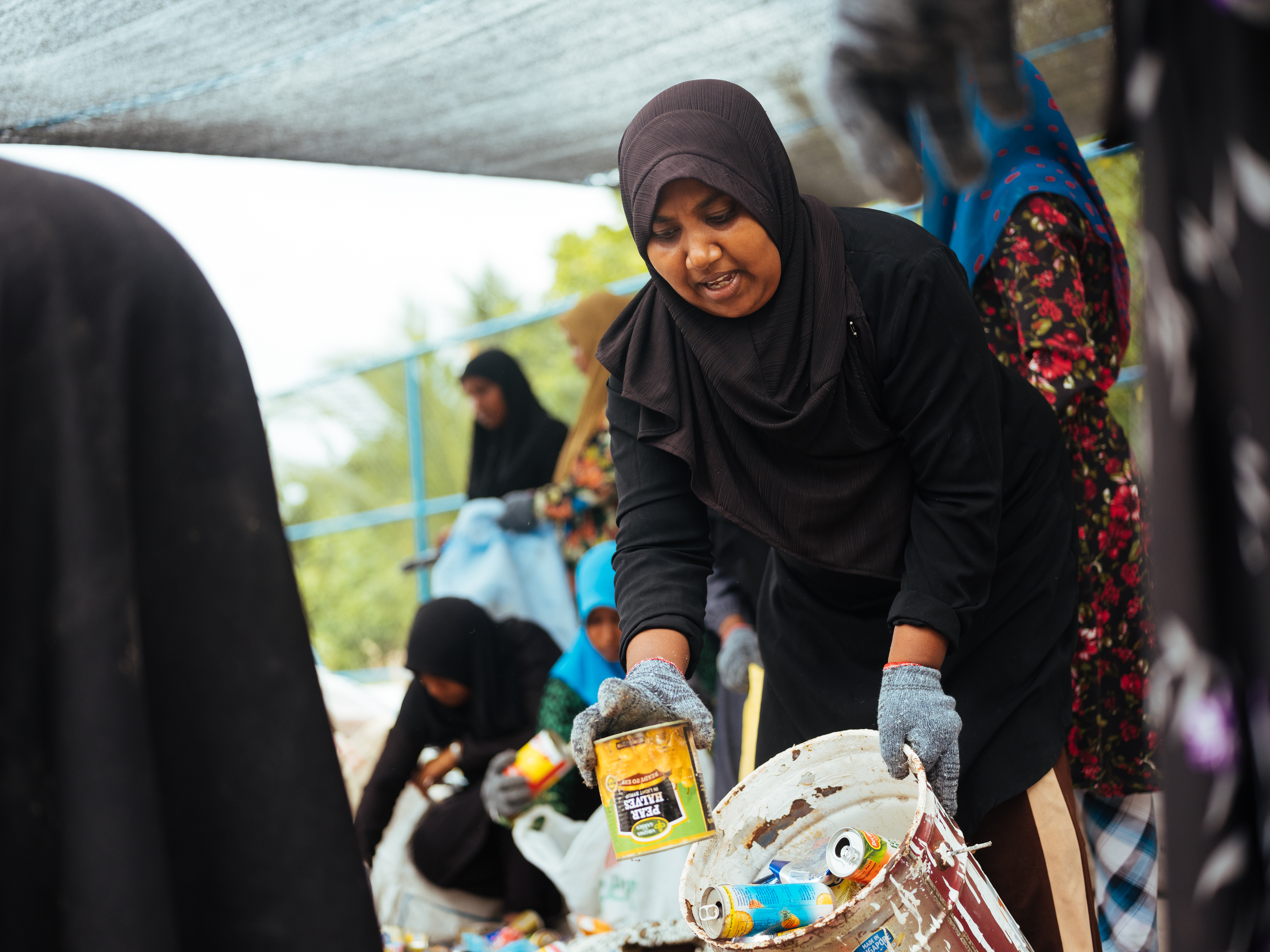 Soneva Namoona, a partnership between Soneva Fushi, our three neighbouring island communities of Maalhos, Dharavandhoo, and Kihaadhoo, and international NGO Common Seas, funded by Soneva and the Soneva Foundation.

Its immediate goal is to get the three pilot islands to end the practice of open burning of waste by the end of 2020.

The small coral islands of the Maldives are among the most beautiful locations on our planet. What many tourists do not see when they visit the Maldives is that local islands are facing a very modern threat – the scourge of marine plastic litter which washes up on beaches and smothers coral reefs. For lack of other options, island communities burn their garbage in toxic open bonfires.

We launched the Soneva Namoona project with a workshop in January 2019 with participants from the islands of Maalhos, Dharavandhoo and Kihaadhoo, central government including President’s Office, Ministry of Environment and EPA, Clean Blue Alliance, Parley and Soneva.

We have set up a water bottling facility at Maalhos that serves 80% of the island’s household and all the local guest houses and cafes. Our plan is to deliver to the two other islands too. As a result, we have eliminated 100,000 plastic bottles.

In February 2020, Soneva Namoona celebrated a Maldives’ first: Maalhos become the first island in the country to end the practice of burning its garbage in open bonfires. This was made possible by the opening of the island’s Eco Centro, a waste-to wealth-centre funded by Soneva and modelled on Soneva Fushi’s own Eco Centro. In November 2020 Dharavandhoo followed suit and we expect to open Kihaadhoo’s Eco Centro in December, so all islands end open burning of waste by 2020.

In 2021 we will work with the Baa Atoll Council to get the remaining 10 islands of Baa Atoll to stop open burning of waste. We have already received commitment from the Maldives President’s Office that they will fund this so that the Namoona model can be a prove method of dealing with waste sustainably in the Maldives.

We have developed a Namoona 5 step plan for island engagement. It is a merit-base approach towards a model for sustainable solid waste management on small islands:

We do awareness raising and training on household segregation for all the households. Furthermore, we work with local groups and schools in educational drives such as the ‘zero waste’ recycling challenge, and watersports festivals. For example, 103 kids participate on the Maalhos Zero Waste Challenge. They separated and sent 1,093 kg of plastic to recycling. We have done three major cleanups on the islands clearing over 500 kg of ocean plastic.

Nurturing a love of the ocean and its ecosystems among the local community is vital to Soneva Namoona’s success – the initiative equips and empowers the next generation of ocean stewards through programmes such as swimming training or surfing lessons for Maldivian children.

The economic value of the waste management system for the local islands is difficult to say. We have spent around USD 500,000 over two years. This includes investments in Eco Centros, recycling equipment, water bottling plant, workshops, awareness raising events, training, and community events.

Without this investment, the islands would not have been able to stop open burning of waste. The Eco Centro upgrades and investment in equipment has been critical. An important equipment all three islands got was a compacting machine. This allows them to compact and bale recyclables like metal, cardboard and plastic so that it takes less space and then is easier and cheaper to transport to recycling facilities.

It has also opened the eyes of the President’s Office, which would like us to roll out the Soneva Namoona model to all 13 islands in Baa Atoll in 2021. They have set aside a special budget of USD 750,000 for 2021 with the aim that all 13 islands stop open burning of waste by the end of 2021. These funds would not have been available without the three pilot islands we have worked with to prove the concept.

The main environmental benefit is that the three islands Maalhos, Dharavandhoo and Kihaadhoo have stopped open burning of waste. This means no more toxic black smoke filling the sky every day. This has a direct health benefit to the communities on these islands.

17 tonnes of recyclables have now been taken off the islands and made use of instead of being burned. 100,000 plastic bottles have been avoided.

Nurturing a love of the ocean and its ecosystems among the local community is vital to Soneva Namoona’s success. We saw it firsthand when we arranged the Zero Waste challenge that the children got excited in segregating waste and collecting recyclables. Some kids even trawled the jungle to find recyclables. Their parents were impressed and one mother said they have never seen the island so clean before.