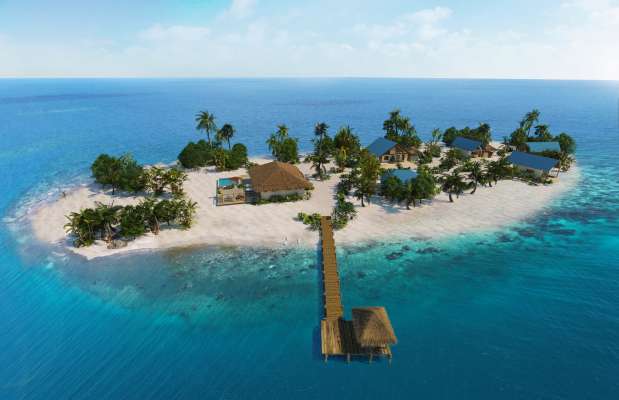 Tesla is one of the success stories that illustrates how a disruptive approach to sustainability can be economically viable when initially positioned as a high-end, aspirational product. Something similar may be at work in the world of sustainable tourism as operators seek to attract discerning customers interested in holidays that are not only close to nature but environmentally friendly.

In Belize, Kanu Island is a rentable private island set a 15-minute boat ride off the coast of Placencia. Built by Private Islands, the 1-hectare property features five villas sleeping up to 20 guests; aside from the dramatic location and facilities, Kanu Island stands out for its dedication to sustainability.

“The goal was to create an off-the-grid eco-friendly island resort with all the comforts of a five-star resort on the grid,” Chris Krolow, the CEO of Private Islands told Architectural Digest magazine. The property is powered by an Outback automatic solar system, which gathers energy and stores it in large battery banks (there’s also a backup diesel generator). Water comes from rainwater catchment systems on the roofs of the villa during the wet season and two desalination machines that produce freshwater in the dry season.

Taking learnings from previous projects helped improve the project. This meant in particular making the rooms more energy efficient, so the air-conditioning units could cool down faster and work less hard. This was accomplished in part by using highly efficient air-conditioning units and in part by insulating the enclosed spaces with spray foam in the ceilings and Coventech foam panels on the walls, both of which keep the rooms cooler than other more common construction materials, such as cement blocks.

“Another thing we did on Kanu that we have not done on previous islands was build a completely separate collection system just for shower greywater.” That greywater system collects runoff in an underground tank, where the water is then cleaned to be reused in toilet tanks. “The water generated from the showers greatly exceeds the demand generated from the toilets, resulting in a total water savings for the island of around 30%,” Keener adds. There’s also a separate treatment system to create water used for irrigating the landscaping during the dry season, which contributes further to water savings.