Greening the Islands for kids

Greening The Islands > Greening the Islands for kids

The big challenge we must face all together

“Climate change is the key challenge of our time. Our generation is the first to experience the rapid increase in temperatures all over the world and probably the last that can effectively combat the imminent global climate crisis. We collectively have the obligation towards future generations to do everything humanly possible to stop climate change as well as to adapt to its adverse effects”.

(Heads of State at COP 24, the Conference of the Parties on Climate Change held in Katowice, Poland, in December 2018)

The words “climate” and “weather” are often used as synonyms, although their meaning is very different. The term weather indicates the atmospheric conditions at a given time, whereas the term climate is the average weather conditions in a certain region over a period of at least 30 years.

The climate varies from area to area over time, but when it varies too quickly, we talk about climate change; and when this change occurs at global level, we talk about global change.

Islands are generally more exposed to the direct effects of climate change.

Islands have generally a more fragile environment than continental areas, due to their limited surface. Their resources are therefore going to be depleted more rapidly, e.g. in case of forests, water sources, fish stocks and biodiversity. Depletion of natural resources does not only occur more rapidly on islands, but the consequences of such depletion can be more severe and irreversible than on the mainland.

Their territory is obviously impacted by any rises of sea levels and is frequently more affected by weather instability. Islands are also generally very exposed to migrations flows, induced either by wars or by climatic changes. The smaller size of islands also exposes them to the more difficulties in absorbing waste and pollution of any kind, including that generated by transportation. Proper management of energy, water, mobility and waste is essential for islands.

Climate Change: the Earth has got a fever

The greenhouse effect is a natural phenomenon through which the atmosphere retains the sun’s energy. Gases such as carbon dioxide (CO2) and methane (CH4) work as a sort of “roof”. During the day, the sun shines and its rays pass through the atmosphere down to the Earth and heat the Earth’s surface. During the night, the Earth’s surface cools down by releasing heat into the air. But part of this heat is trapped by greenhouse gases.

This phenomenon ensures warm and comfortable conditions to our planet. However, if there are too many greenhouse gases in the atmosphere, the greenhouse effect becomes too strong and the Earth overheats, thus producing a climate change. This is what is happening now.

According to scientists around the world, human activities have generated huge additional volumes of greenhouse gases, thus causing an increase in the average temperature of the Earth. Greenhouse gases are produced by emissions from industries and power plants, transport vehicles, residential heating and cooling systems.

What Happens if the Earth Gets a Fever?

The consequences of global warming can be observed throughout the world. The temperature is increasing every year, causing the melting of polar ice caps and an increase in sea levels.

Venice could disappear, like many other islands, and those who live on coastal areas may be forced to move.

Millions of people may have to look for somewhere else to live.

Fires are more and more frequent, so is drought: there is a lack of water for animals, land is becoming arid, crop farming is harder and famine is a threat.

Frequent tornadoes and hurricanes, which have destroyed cities and villages in the last few years, are also related to climate change.

Biodiversity is decreasing, many animal and plant species could disappear, to the point that we talk about the Sixth Extinction in history.

The Global Agreement on Climate Change contains 29 articles, resulting from long discussions among representatives of almost 200 States, who met in Paris in December 2015. Obviously not all Countries can take commitments immediately; many Countries still need to get organized and unfortunately the United States, one of the largest producers of greenhouse gases, decided not to support the Paris Agreement.

The 5 main goals and objectives of the document:

What can we do to combat climate change?

We must stop emitting CO2 and other gases which cause climate change. Governments are looking for global solutions, but we can give a very important contribution every day in four major areas: energy, water, mobility and waste.

Shift to renewables. Solutions to produce clean energy are already in use: solar energy, wind power, hydroelectric power, geothermal energy, … but it is important to exploit them more. For example, at home we may decide to use renewable energy by changing our power supply contract.
Energy saving. There is a lot of energy waste in our homes. We can reduce consumption by using low-consumption light bulbs (fluorescent tube light bulbs or led light bulbs) low-energy appliances with A+++ rating, double or triple glazing, or by installing solar panels on our roof or a coat for our house.

Use least polluting means of transport. It would certainly be better to reduce the use of the car, motorcycle and plane and to go by train, use public transport, a bicycle, or go on foot.  If we have to use our car, we should use car-pooling solutions to share the car with other people travelling to the same place. We should give preference to electric vehicles, especially with regard to transport and service vehicles.

Recycle the waste we produce. A lot of raw materials and a lot of energy are used to manufacture products and greenhouse gases are produced in the manufacturing process. Therefore, it is very important to recycle waste, which can be used to manufacture new products. We should not use disposable goods such as plastic plates and cutlery and we should use water canteens instead of plastic bottles. In general, we should drink tap water instead of bottled water. 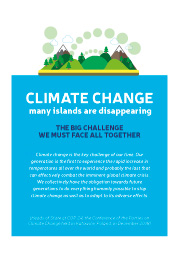