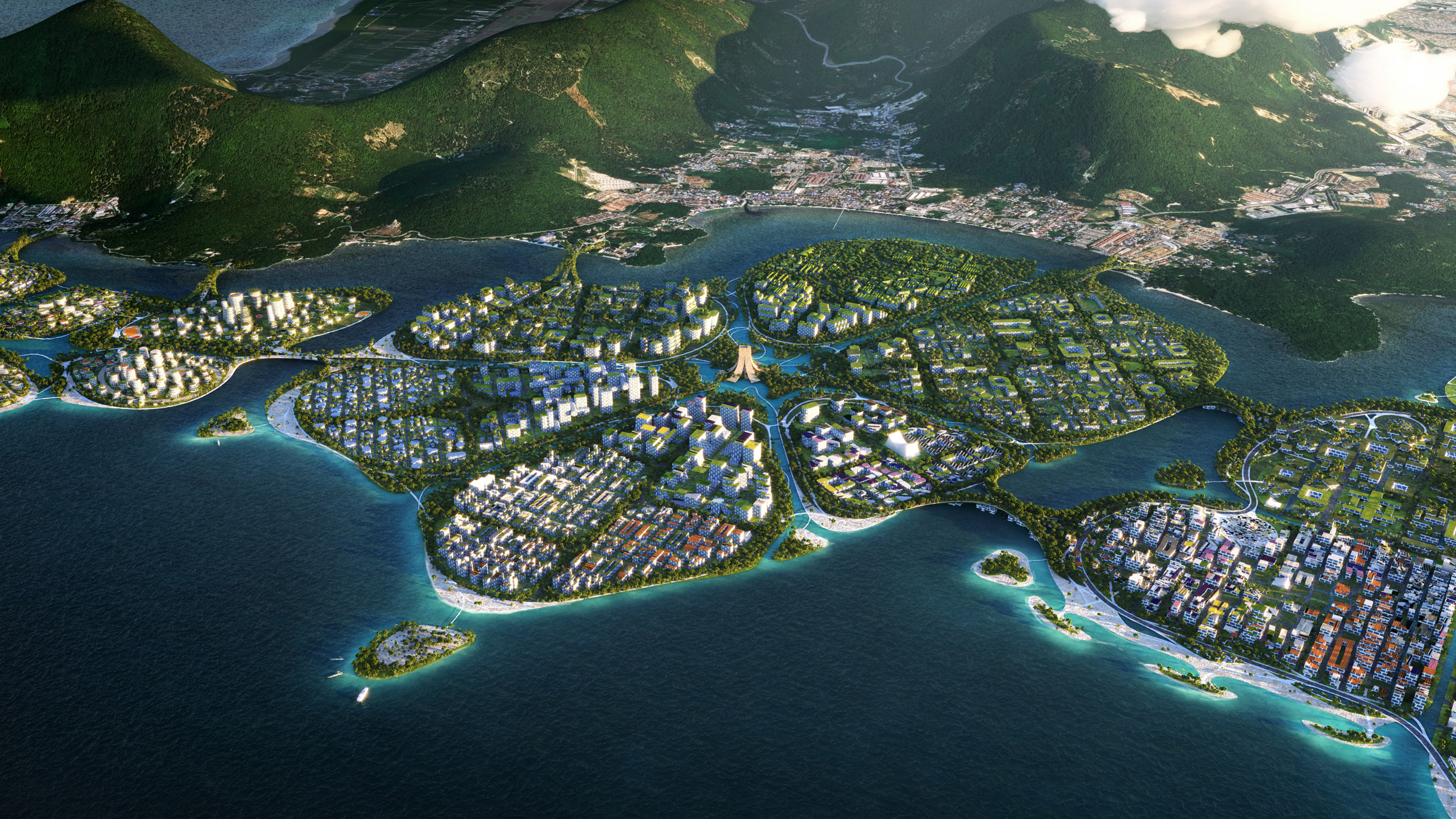 BiodiverCity is a masterplan by BIG that will see three artificial islands built off the shore of Penang Island, Malaysia, connected by an autonomous transport network.

The vast land reclamation project, which will encompass 1821 hectares, is being developed by BIG for Penang State Government in collaboration with Ramboll and local architect Hijjas.

Each island is modelled on the form of a lilypad and will be composed of mixed-use districts, 4.6 kilometres of public beaches, 242 hectares of parks and a 25-kilometre-long waterfront.

The island districts are expected to each support between 15,000 to 18,000 residents and will all rely on localised water resources, renewable energy and waste management.

They will also be connected by an autonomous water-, air- and land-based transportation network to make BiodiverCity a car-free environment, prioritising bikers and pedestrians.

Around the buildings and districts will be a web of ecological corridors called buffers, which range between 50 and 100 metres and be used as nature reserves and parks to support biodiversity. 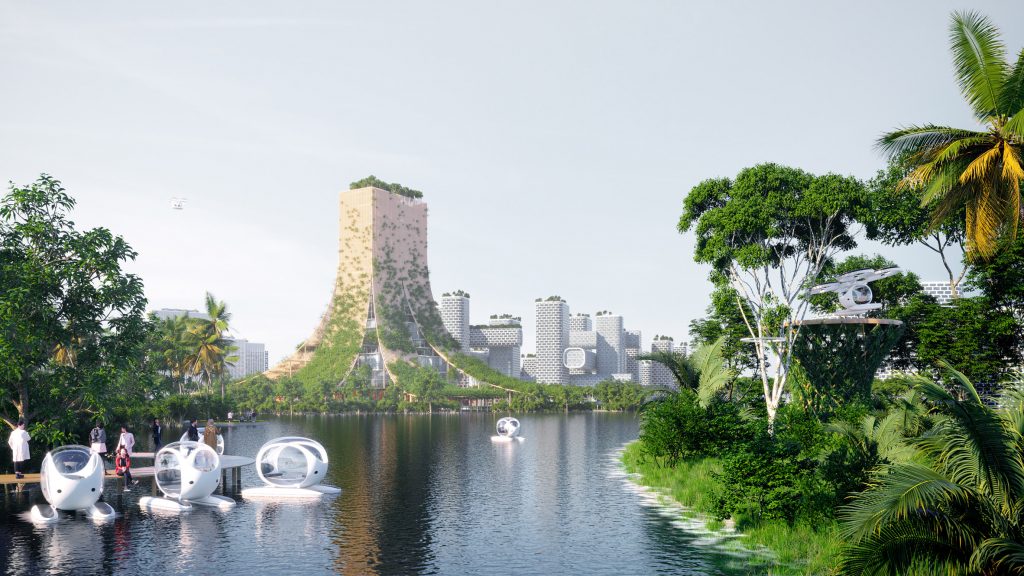 All this is in support of the state’s Penang2030 vision, for which the goal is to become “family-focused, green and smart”.

“Our masterplan proposal, BiodiverCity, supports the Penang2030 vision with a clear focus on livability, on stimulating a socially and economically inclusive development, and on environmental sustainability for future generations,” said BIG.

“BiodiverCity will be a new sustainable global destination where cultural, ecological and economic growth is secured and where people and nature coexist in one of the most biodiverse places on the planet at the southern shore of Penang Island.” 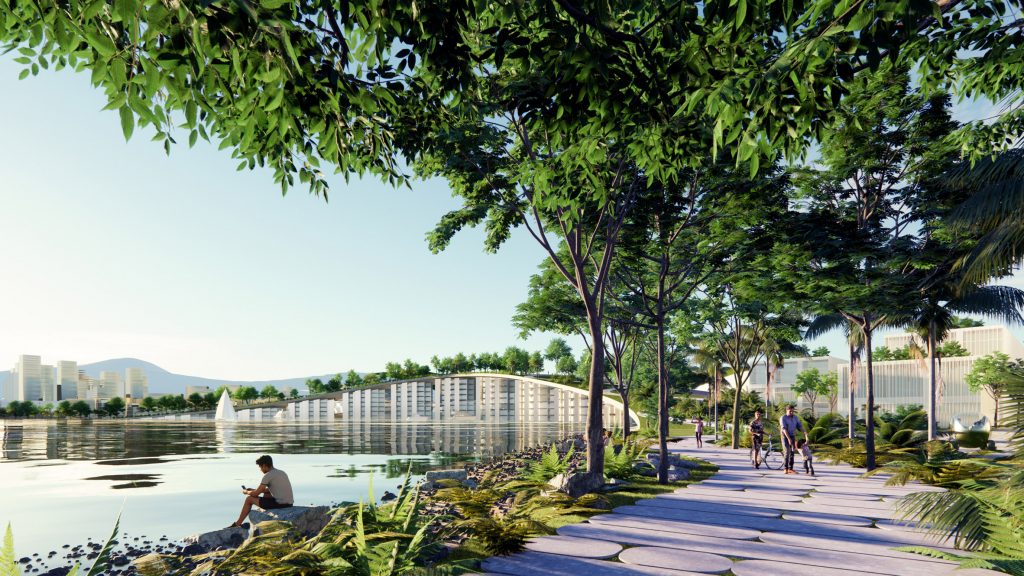 The proposal is the winning entry of a competition held by the Penang State Government for its Penang South Islands development – an existing plan for a land reclamation project off the island’s south coast.

BIG’s proposal was selected ahead of five other finalists, including Foster + Partners and MVRDV, in recognition of its ambition to “promote coexistence with nature”. 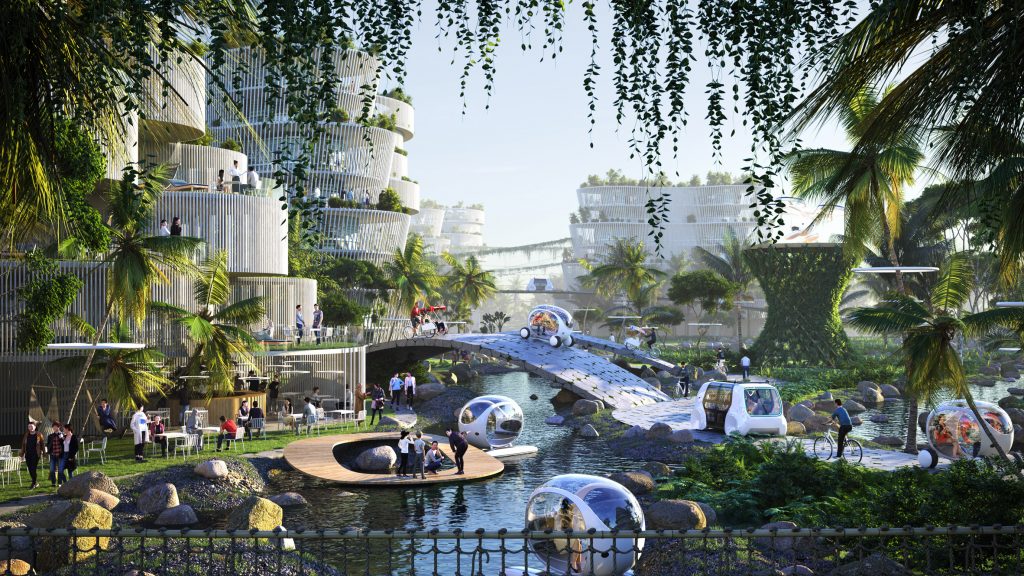 “If Penang is defined by its rich cultural diversity and its abundant biodiversity, we would like to envision the Penang South islands as an archipelago where the two can coexist in a human-made ecosystem, expanding and enhancing one another,” said BIG founder Bjarke Ingels.

“We proposed the creation of urban lilypads organised by a cellular structure of urban districts connected by natural patches and corridors for habitats,” he continued. 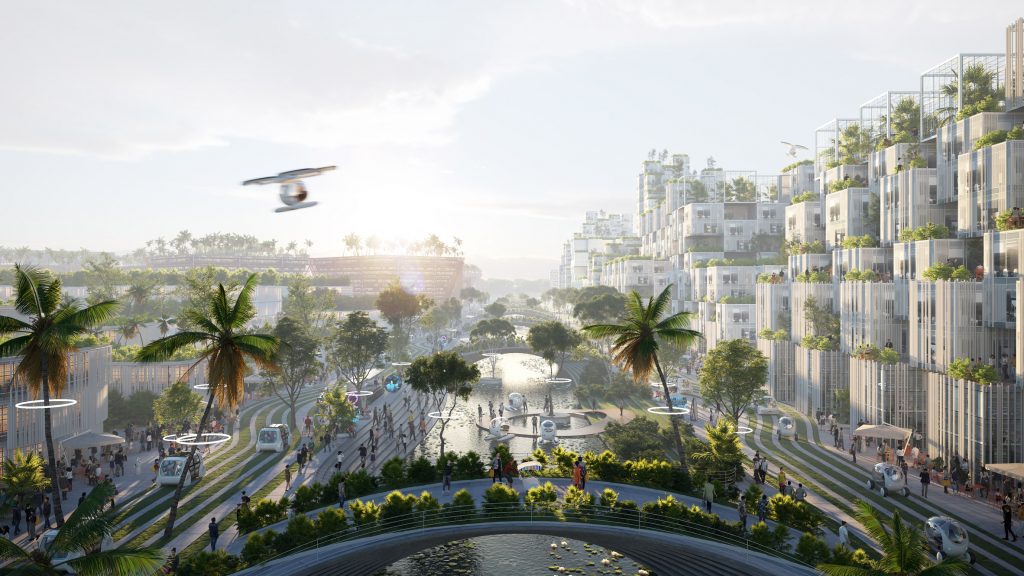 The first island in the masterplan is called Channels. This will comprise the Civic Heart, an area for government and research institutions, and the Cultural Coast district that will resemble Penang state’s capital, George Town.

As the heart of the island will be a 200-hectare digital park, which BIG says will invite locals and guests to “explore the world of technology, robotics and virtual reality”. 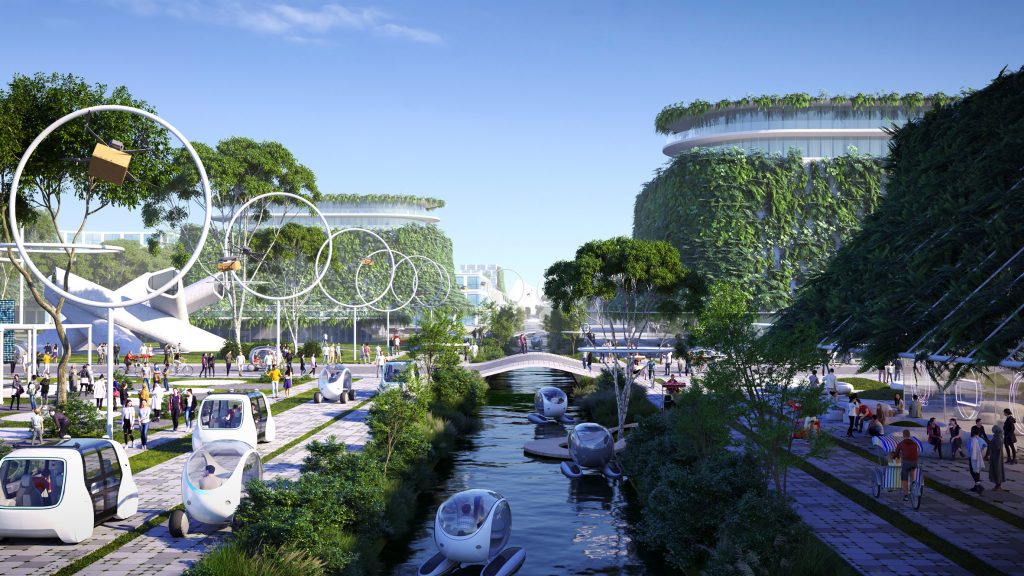 Mangroves is the second and central island of BiodiverCity, which will be dedicated to business-focused districts. At its centre will be the Bamboo Beacon – a facility for conferences and major events.

Here, districts will be organised around a network of urban wetlands and Mangrove forests. 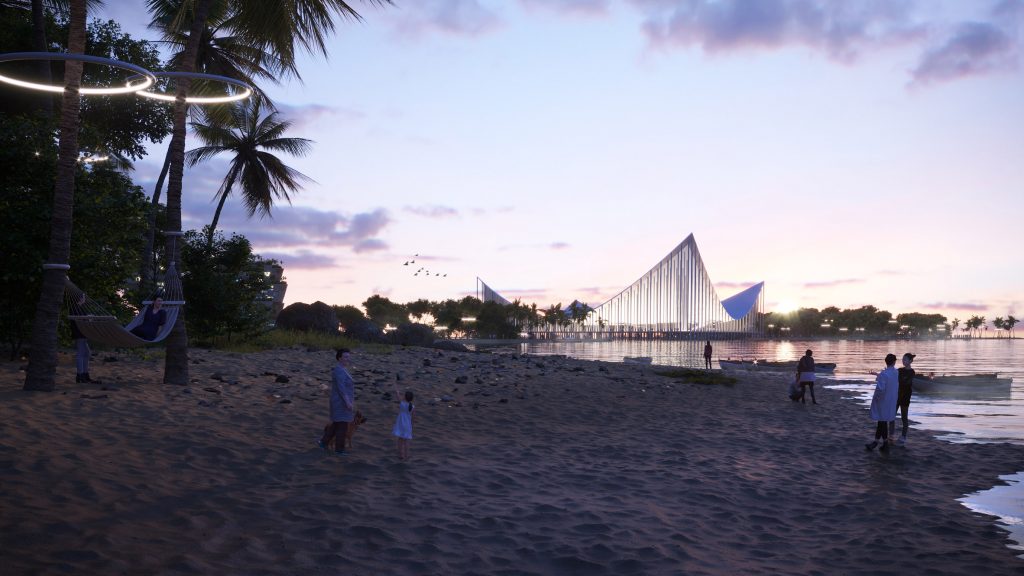 The final island, named The Laguna, is described by BIG as a miniature archipelago and will be composed of eight smaller islands organised around a central marina. 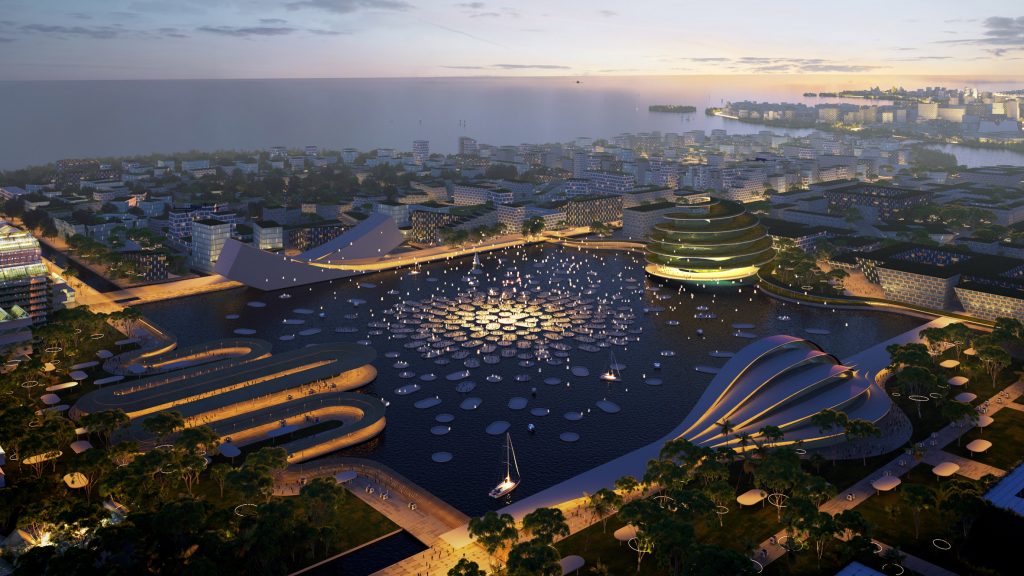 BIG is the architecture practice of Danish architect Ingels, which was founded in 2005. Today it has studios in Copenhagen, New York, London and Barcelona.

Elsewhere, BIG is working a masterplan for the “city of the future” with Toyota, which will be built beside Mount Fuji in Japan. 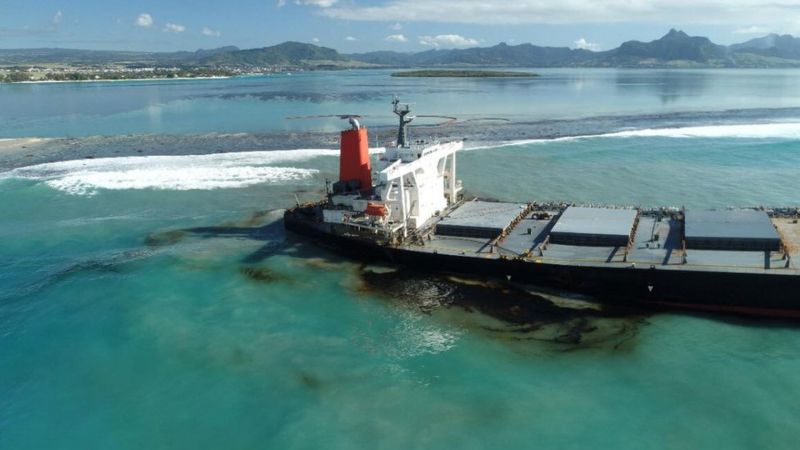 Why the Mauritius oil spill is so serious 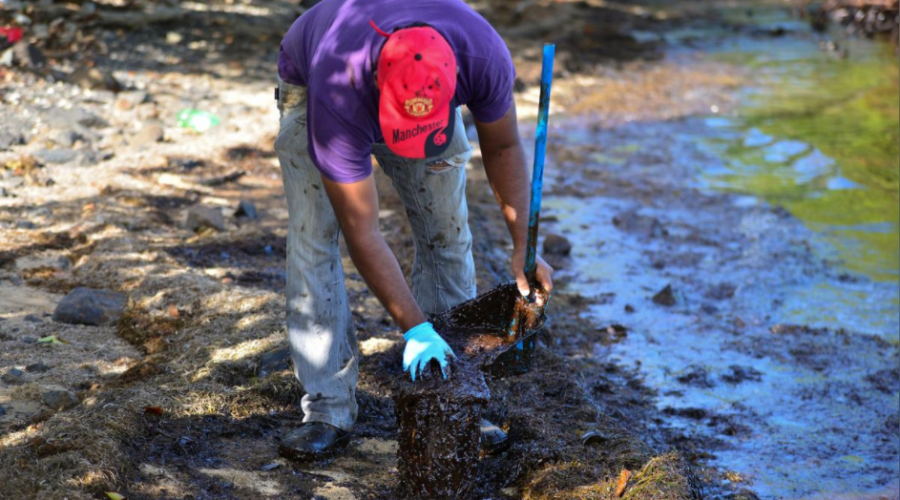