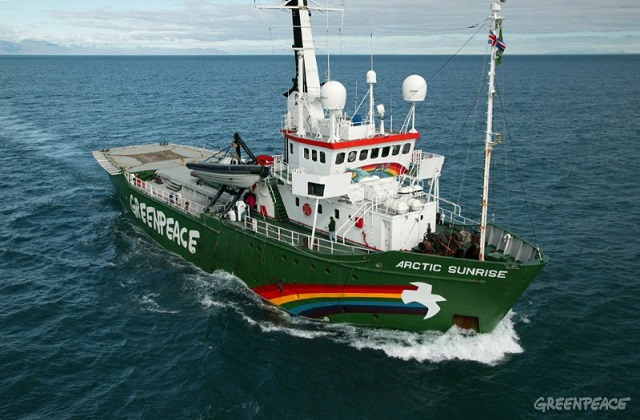 Greenpeace International will carry out research in Seychelles’ waters from February 27 to March 30 as part of an expedition within the Mascarene Plateau through which the island nation will learn more about its underwater life.

The research will be done while the vessel – Arctic Sunrise – makes its transit towards the Saya de Malha Bank which is part of the Mascarene Plateau region between Seychelles and Mauritius.

According to Greenpeace, the Saya de Malha Bank, which lies to the southeast of Seychelles, “constitutes one of the largest shallow tropical marine ecosystems on Earth. It is home to one of the few shallow water coral reef ecosystems in the high seas and contains the most extensive seagrass meadow in the world.”

The research’s target is to collect information about the biological diversity present at the Saya de Malha Bank, following the scientific expedition visiting unique sites in the international waters of the Atlantic Ocean.

During the expedition, Greenpeace International wishes to contribute to the knowledge base about biodiversity in the area through mapping the fish, shark and whale diversity of the area by means of environmental DNA sampling.

Through photographic and video surveys, seagrass meadows and coral reefs will be also be monitored. The marine megafauna is expected to be surveyed and possibly detected via passive acoustic monitoring, visual observations and photo identification.

Sheena Talma, a Seychellois marine scientist who will be part of the second leg of the expedition, said that she will be helping with the collection of environmental DNA, also known as e-DNA.

Sheena Talma, a Seychellois marine scientist who will be part of the second leg of the expedition, said that she will be helping with the collection of environmental DNA, also known as e-DNA.

“The second leg starts on March 14 and it is going to the Saya de Malha. There will be e-DNA collections, where you collect some water so you can find out what animals live in that water,” said Talma.

She explained that the water samples contain pieces of scale or mucus that comes from different animals. Once the sample is collected, it is filtered and the small particles are processed to establish which animal lives in this part of the ocean.

“They are also doing surveys to find out what kind of whale and dolphins live in that area. You also need to know what the environmental parameters are – what the temperature is like and the salinity of the water,” said Talma.

This is not the first time that Talma will take part in an expedition exploring the waters of Seychelles. In 2019, she was part of the Nekton Deep Ocean Exploration.

“It is really great to be able to get out at sea, especially in an area I haven’t explored before. For me, this is a great learning opportunity as I get to work with other scientists. It is also a great way to get involved in other research as my main research is in fisheries. The team also contacted me because I have experience using genetics in previous studies. I was on an expedition last year in the Maldives where I was able to collect e-DNA samples,” said Talma.

The special advisor for the Blue Economy, Phillipe Michaud, told SNA that Seychelles is not paying anything for the research work.

“We will get a copy of the research that they carry out. It is important to know more about what we have in our waters so that we can better plan, manage and exploit them,” said Michaud.

The length of time it will take to get the results of the research will vary depending on the type of research carried out. Michaud said that some information can be provided immediately while others will need to be analyzed and hence will take more time to acquire.