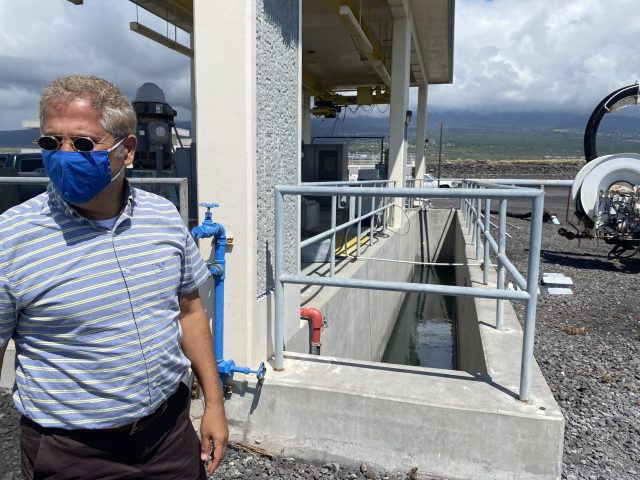 The lower category of recycled water could still be used on golf courses and for some types of farm irrigation.

Ramzi Mansour, environmental management director, said he’s exploring a much simpler, cheaper alternative. Instead of building out a multi-million sand-filtrated treatment plant focusing on R1 water — the highest-grade of recycled water — Mansour wants to produce R2 water, which can still be used for golf courses and agricultural irrigation at a fraction of the price.

“We are not going to spend the $160 million and that by itself is a relief,” Mansour said this week, shortly after Hawaii County Mayor Mitch Roth’s cabinet participated in a forum on what the administration has accomplished in its first 100 days. “Depending on the operational techniques and the Department of Health concurrences, we may be able to do it in tens of millions rather than hundreds of millions.”

R2 water is one step down from R1 water, but still highly useful.

Mansour said the department’s short-term goal is to explore the techniques for processing R-2 water — or even better, R-1 water – without major facility improvements, and to secure the proper permits for those discharge levels once it does.

“We can do it,” Mansour said on a recent tour of the wastewater treatment plant.

Then it’s just a matter of finding users for the R2 water. Nearby golf courses and farmers are at the top of that list, and discussions are underway.

“I would say we’re very close,” Mansour said. “We’re continuing to monitor the results in the effluent … we’re already at the R2 water, even better.”

Golf courses and farmers were at the top of the list of possible users during the previous administration when the $160 million plan focused on creating R1 water. But that plan, in part, called for the treated water to run through a sand filtration system, which added to its cost.

Grants to fund some of the construction for the plant had been identified, according to the department’s previous director.

Nevertheless, the new director said, the plant aimed too high given the realities of Hawaii’s population and finances.

“Who’s going to fund a $160 million project?” Mansour asked. “Definitely, the county doesn’t have the funds. That’s almost half the county budget.”

Designing and planning on the years-long process have already topped $11 million. Those plans now appear destined to sit on a shelf.

But it’s possible to still save the money and not sacrifice the product, Mansour pointed out, because the plant is capable of processing high-grade recycled water.

Essentially, the science is already there.

R-1 water is recycled effluent that has been oxidized, filtered, and disinfected so that it can be safely used in an abundance of ways. Those include irrigating crops, pastures, parks and golf courses, for washing surfaces, as well as for decorative uses like filling water fountains. R-2 water is similarly oxidized and disinfected, but hasn’t been filtered. It can be used for underground irrigation of some – but not all — food crops, as well as pastures, golf courses and parks, which is exactly what the new administration aims to do with Kealakehe’s supply.

“Let’s get money invested in the operational techniques,” said Mansour, who worked as division chief of Wastewater Treatment and Disposal on special assignment to the director of Environmental Services for Honolulu before joining Roth’s cabinet after the election. “We could get $160 million (in value).”

The wastewater is currently processed through five aerated lagoons and then discharged into a sump where it percolates through the soil. At that point, it’s at R-2 quality, Mansour said.

So, it’s just a matter of locking down users.

In that regard, Mansour said he’s hoping more potential users contact his office. He’s sure enough farmers and landowners in rural, sprawling Hawaii County could put the water to good use.

The department also has its hands full rectifying some 7,000 cesspools in West Hawaii that need to be addressed.

Property owners in the southeast part of the island where cesspools are prevalent are being asked to hook up to sewer at expensive rates, at least $250,000 per household. Mansour said the department is working with the Environmental Protection Agency to seek a more affordable solution.

The department is working with several governmental agencies on securing the proper permits for their new, cheaper goals. The Kealakehe operation, meanwhile, is currently in compliance with state and federal environmental requirements. The county is monitoring a U.S. Supreme Court ruling in a similar discharge situation on Maui that could have ramifications on the permitting process here.