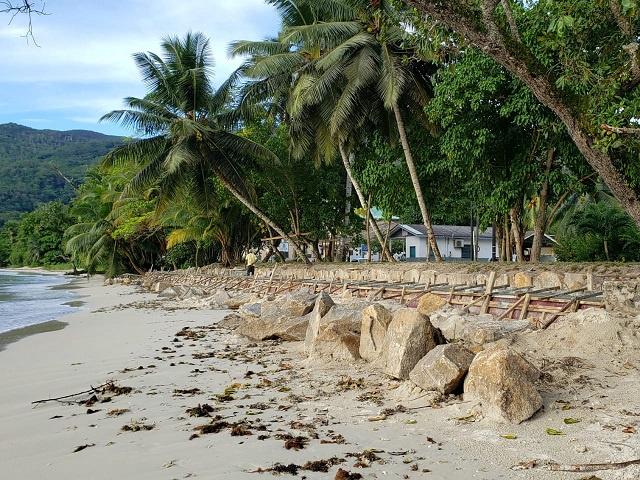 (Seychelles News Agency) – Seychelles, in partnership with the World Bank, is for the first time exploring the potential of implementing an innovative solution to build the island nation’s coastal resilience and reduce the impact of coastal erosion.

This solution, called the ‘blue barriers’ concept, involves the construction of an underwater structure through the use of non-toxic materials, onto which corals are transplanted, creating a man-made reef.

The principal secretary of Environment, Alain De Comarmond, told SNA that the blue barrier concept is another approach used for climate change adaptation.

“There are different ways to deal with coastal erosion. You can stop it when it reaches the land, where you build walls or do rock armouring. Another option is to break the wave before it reaches land, hence reducing the energy of the wave, which is the normal function of coral reefs. This concept can be implemented in places where there is no coral reef or have been affected by coral bleaching,” said De Comarmond.

Under its current coastal management plan, the Seychelles’ government has so far used both hard and soft engineering approaches to protect coastlines in the country greatly affected by erosion. Such methods include the construction of seawalls, rock armouring, rehabilitation of sand dunes and beach berms, and the planting of vegetations.

Between March and May 2019, another coral bleaching event occurred in Seychelles, where surface sea temperatures crept up to 31 degrees Celsius and caused widespread damage to reefs in the area.

In a blog post of the World Bank, the principal secretary outlined that “coral reefs are critical for Seychelles, not only in terms of biodiversity but also for coastal resilience and the development of the blue economy.”

He added that the blue barrier concept opens up the opportunity to bring these objectives together and build a coalition of government, civil society and the private sector.

Three sites in Seychelles– Beau Vallon, Cote D’Or and Anse Kerlan — have been shortlisted for the implementation of the concept. So far local scientists have conducted baseline studies on the different sites, where they looked at the biological composition of the area.

“There are different aspects that need to be considered, the environment, wave activity, how many users there are and potential conflicts that might happen. These will be done by external experts. We also need to look at which approach to adopt,” said De Comarmond.

Following analysis of these data, one site will be chosen for implementation. This is expected to be done by next month.

De Comarmond added that his department is looking to synergies with non-for-profit organisations already working on restoring corals.

“In Seychelles, the bank and the government are working together to strengthen financial relief in case of a disaster through instruments like the Catastrophe Deferred Drawdown Option, which quickly releases emergency funds once a declaration of emergency is declared, with technical assistance to build coastal resilience and bolster emergency management,” he said.

Even if the blue barrier concept is still in its early days, coral restoration projects using artificial structures are growing in number, and promising techniques continue to emerge. Countries such as the Maldives, France, and Grenada are already using different methods to rebuild their coral reefs.