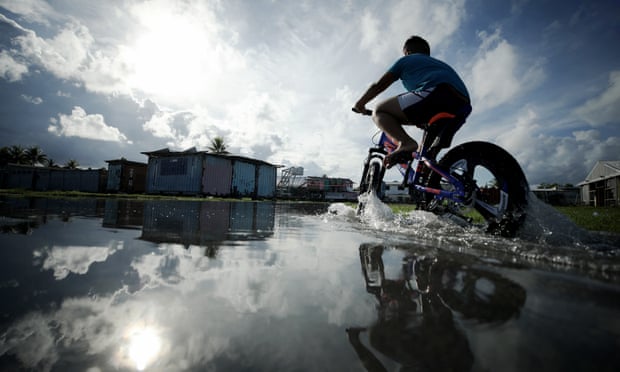 Pacific representatives and negotiators have condemned the outcome of the Cop26 meeting as “watered down” and a “monumental failure” that puts Pacific nations in severe existential danger, with one saying that Australia’s refusal to support funding for loss and damage suffered by Pacific countries was “a deep betrayal” of the region.

Some Pacific leaders expressed qualified optimism about the result of the critical climate summit, such as the Fijian prime minister, Frank Bainimarama, who tweeted: “The 1.5-degree target leaves Glasgow battered, bruised, but alive.”

But many other Pacific experts and climate negotiators were disheartened by the result.

“The first draft of an otherwise very unambitious text had one notable bright spot in it – the phase-out of coal. This was further watered down. For a planet in crisis, this represents a monumental failure in recognising the clear and imminent danger entire countries are now in, including my own.

“For all the hoopla and greenwashing since yesterday, the fundamental fact remains: we are still headed for a two-degree-plus world,” he said.

For Samoan negotiator Galumalemana Anne Rasmussen, who is the representative of Small Island Developing States (Sids) to the Cop bureau, the Pacific can only do so much.

“The Alliance of Small Island States and Pacific Sids really pushed hard, everyone engaged, but unfortunately it is always up to the developed and rich to determine the fate and direction of these pledges and outcomes.”

A regional oceans and climate expert from Tonga, Taholo Kami, agreed: “I think we may be finding leadership at subnational and national level, private sector and even consumer and community level offer more hope at this time than the lethargic Cop process where we are forced to celebrate painful and minimal shifts with text and leave not knowing if this will result in meaningful outcomes.”

In particular, Pacific leaders were disappointed by the softened language on “phasing down” rather than “phasing out” coal, and also the lack of strong commitment for funding to pay for loss and damages suffered by Pacific nations due to the climate crisis.

“Cop26 also failed to adequately recognise our present reality – we are facing the impacts of climate change right now,” said Auimatagi, who has worked with Pacific governments under the process of the UN framework convention on climate change. “Yet despite their historical responsibility for our current plight, developed nations like the US, UK and Australia refused to support a funding facility for loss and damage which, in Australia’s case, presents a deep betrayal and abdication of its responsibilities to its Pacific neighbours.”

Hilda Heine, the former president of the Marshall Islands, who has been a key figure in climate negotiations in previous years, tweeted she was “disappointed EU and US [High Ambition Coalition] members did not rally behind funding facility to support the vulnerable respond to loss and damages caused by industrialised world’s addiction to [fossil fuels] and coal”.

Despite travel restrictions, costs and risk to health, Pacific islands sent negotiations teams to Cop26 in the hopes of influencing outcomes and ensuring that Pacific concerns were heard.

The minister for finance of Tuvalu, one of the atoll nations considered most at risk of disappearing due to sea level rise, gave an emotive speech to the summit in which he spoke of the impact of the climate criss on his country.

“It is not fiction, it is not projected to happen in the future – our land is fast disappearing. Tuvalu is literally sinking. We must take action now.”

But even the presence of Pacific negotiators could not influence the outcomes of the Glasgow summit, which as it stands – even if conditional and unconditional nationally determined contributions for the near-term target of 2030 were met – projected that warming might still spell the end for some Pacific atoll nations.

“Going forward, it’s time we look at not only drastically reducing our fossil fuels consumption, but begin taking serious steps ahead of Cop27 to stop fossil fuel production altogether and begin a just transition before it is too late,” Auimatagi said. “Only then can we have a real shot of keeping 1.5 alive and ensuring our islands – and our planet – survives.”