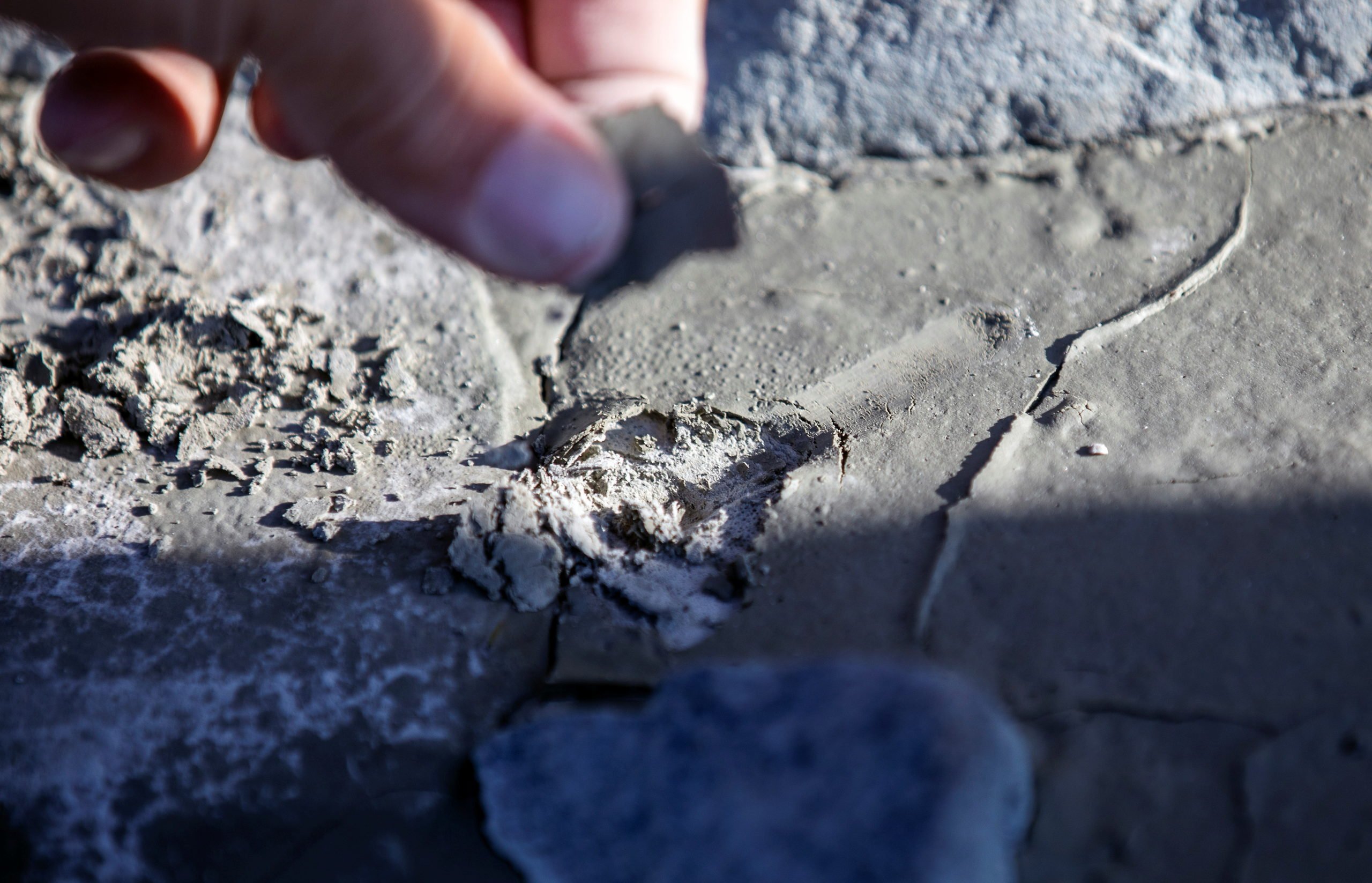 The glacial rock flour left behind by a retreating ice sheet is “kind of wonder material,” says a Greenlandic geologist.

NUUK FJORD, Greenland — On a shore near Greenland’s capital Nuuk, a local scientist points to a paradox emerging as the island’s glaciers retreat: one of the most alarming consequences of global warming could deliver a way to limit its effects.

“It’s a kind of wonder material,” says geologist and professor Minik Rosing, referring to the ultra-fine silt deposited as the glaciers melt.

Known as glacial rock flour, the silt is crushed to nano-particles by the weight of the retreating ice sheet, which deposits roughly one billion tonnes of it on the world’s largest island per year.

Rosing and his team at the University of Copenhagen have established the nutrient-rich mud boosts agricultural output when applied to farmland and absorbs carbon dioxide from the air in the process.

Scientists at multinational brewer Carlsberg are also investigating and have found that adding 25 tonnes of glacial rock flour per hectare increased crop yield on barley fields in Denmark by 30 percent.

Similarly, researchers from the University of Ghana, managed to increase maize yields by 30 percent using glacial rock flour to offset the impact of rain and heat on poor farmland.

The nano size of the silt’s particles is what allows plants more access to nutrients including potassium, calcium and silicon compared to normal rocky farmland.

“We are the stage in this project where we definitely know that it works,” Rosing says. “There are many barriers between this and a big scale industry, but the potential is definitely there.”

His team has asked Novo Nordisk Foundation, owner of drug-maker Novo Nordisk, to extend its financing of the project.

Following on from the small tests, over the coming three years, larger-scale field tests are planned in Denmark and Ghana to assess whether it makes economic sense to ship the material to farmers around the world.

The scientists also plan to begin testing the material on other soil types in Australia, France, Italy and the United States next year.

When the silt dissolves in rainwater and releases its nutrients, it undergoes a chemical reaction that locks in carbon dioxide from the atmosphere. The solution is then washed out with drainage water and eventually deposited on the seabed as carbonate minerals.

The idea of applying finely-grained rock to farmland is not new and several studies have shown that by-products from mines or quarries can improve soil quality. But the method has gained interest due to the added benefit of absorbing CO2.

“That realization has been a catalyst for a lot more research in this area,” David Beerling, professor at the University of Sheffield and lead author of a study on crushed basalt, said.

The study found that spreading finely crushed basalt on fields, as well as helping crops to grow, removes CO2 from the atmosphere at a cost comparable to other methods of carbon capture.

Such detailed calculations have yet to be made for glacial rock flour, but tests by the scientists in Copenhagen indicated that 1 tonne of glacial rock flour would absorb between 250 and 300 kilograms of CO2 when applied to fields, potentially allowing farmers to sell that as carbon credits.

With vast amounts easily available on Greenland’s shores, Rosing says it could be an alternative to sourcing rock dust from mines or mechanically crushing it.

The scientists at Carlsberg see it as potentially a more sustainable alternative to conventional fertilizer.

“It would be good to be able to use it as substitute for nutrients such as phosphorus that are expected to run out in 50 to 100 years,” Pai Rosager Pedas, senior scientist at the brewer’s research laboratory.

Glacial rock flour has potential to replace phosphorus, mainly mined in China, Morocco and the United States, or potassium, mined in Canada and Russia. However, nitrogen, which is made from ammonia through an energy-intensive process, still needs to be added.

Canadian fertilizer company Nutrien says it has looked into mining and shipping silt from deposits outside Greenland, but found that it was not economically viable.

“The stage of development of glacial rock flour in Greenland is very early indeed and we cannot speculate on its potential at this point,” a spokesperson said.

Greenland’s new government, which has taken a more careful approach to developing the country’s natural resources, hopes the mud can one day can bring much-needed revenue as an alternative to dirtier forms of mining.

“This is a really interesting resource and part of a positive narrative that we want to tell the world,” Resources Minister Naaja Nathanielsen told Reuters.

“We don’t need to blast off the top of a mountain or build a processing plant,” she told potential investors at a presentation in Nuuk in September.

Government officials will present the mineral at a mining conference in Vancouver early next year, although they say commercial mining and use could be years away.

The ministry has received an enquiry from a group of local entrepreneurs who aim to apply for an exploration permit, a preliminary stage.

The more onerous process of securing a mining license would require detailed studies on the impact on the environment and local society.

“Glacier flour is incredibly interesting, also because of the volumes. It can easily be shipped to the farmers in containers,” Verner Hammeken, CEO of Greenland’s state-owned shipping company Royal Arctic Line, said.

The scientists at the University of Copenhagen and the University of Ghana say success at scale could improve food security and economic imbalances partly caused by an uneven distribution of good quality farmland across the world.

Geological surveys show that the best farmland, which stretches across parts of North America and Europe, was covered by ice during the last ice age.

As is happening in Greenland today, the thick layer of ice ground and revitalized the soil.

“In Northern Europe, we think the reason we’re better off than the rest of the world is that we are so much smarter than everyone else. In fact, we just have better soil under our rubber boots,” Rosing said.