Water and sanitation in the Pacific continue to be dire 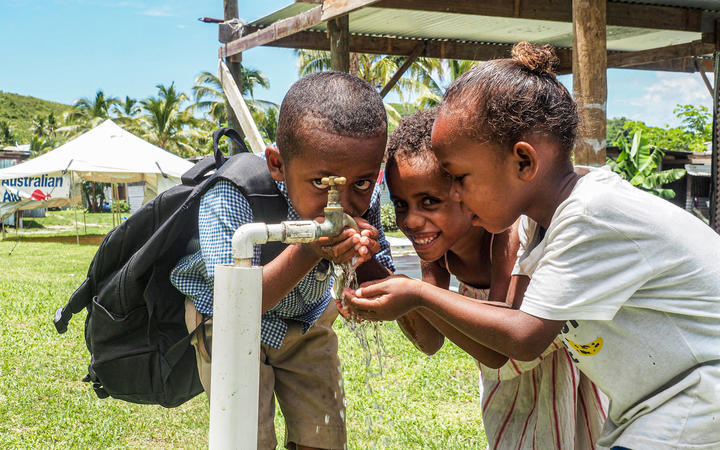 There’s concern that addressing water and sanitation challenges in the Pacific has become an afterthought for regional politicians and international leaders.

The Pacific Community (SPC), which provides scientific and technical expertise to the island nations on issues like water and climate change, is reporting a decline in water hygiene initiatives in the region.

Around 70 percent of the Pacific population don’t have their basic sanitation needs met including access to running water to wash hands after using the toilet.

He said it was a worry that water “doesn’t get the same focus from leaders in the region and internationally as some of the more obvious issues like disaster resilience and climate change.”

“It has many negative impacts health-wise. In places where there is no access to clean water from a tap, people have to walk to extract water from streams and wells, and often it’s the children and women that get that job. That interferes with education and has flow-on impacts.”

Papua New Guinea is the largest Pacific population and is in dire need of better water hygiene and accessibility. Although a lot of work is going on – more than two million people still don’t have access to clean drinking water.

Dr Minichin said the nation was not keeping up with demand and that “dedicated focus and investment” was crucial.

Water access in Oceania is at 57 percent – below sub-Saharan Africa – whereas most other regions in the world are above 90% access. The world average is 78 percent.

The issue of water access is complex and primarily felt in rural and remote island communities.

An example of this is Fiji’s Kia Island, in the village of Yaro, which was devastated following Cyclone Yasa in December 2020.

The Fiji government asked SPC to find a solution after the water supply system – which is reliant on rainwater – was destroyed.

Teams drilled two boreholes which allowed 2000L of freshwater a day to be piped into the community. Villagers paid $FJD10 or $USD5 per person to run taps in their homes.

It’s since had a positive boost to health and education outcomes for families.

Children no longer have to fetch water and can now make it to school on time. He said it’s also reduced skin sores and diarrhea in the community.

“Finding an alternative water supply has an impact that goes far beyond giving people water.”

Minchin said it was costly and challenging to get a drill rig out to remote areas. While Yaro’s water situation has improved, the other two villages on Kia island still lack access to clean drinking water.