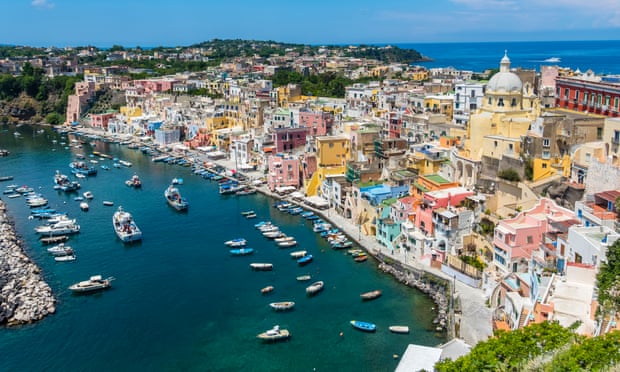 Church bells chime and children play freely in the square named after the late actor Massimo Troisi. A restaurant serves fresh fish to the smattering of customers eating outside, and fishermen mend their nets. With clear blue skies, it seems like a typical afternoon in mid-summer.

But this is late January in Corricella, a 17th-century port in Procida, and the scene pretty much sums up the pace of life on what is the smallest and least known island in the bay of Naples.

Parts of Troisi’s 1994 Oscar-winning Il Postino were filmed in Corricella, and the area shot to fame again a few years later as the fictional village of Mongibello in The Talented Mr Ripley. Both films helped raise Procida’s profile, but not enough to keep the majority of visitors from overlooking it in favour of the glamorous Capri or Ischia, popular for its natural hot springs.

Now the colourful Mediterranean island has been thrust back into the limelight after recently winning the coveted accolade of Italy’s Capital of Culture for 2022, fending off competition from nine other candidates. It is the first time that the title has ever been granted to an island.

The prize was a moment of celebration among the island’s 10,000 inhabitants and gave a glimmer of hope for the future amid Italy’s ongoing struggles with the coronavirus pandemic. Giuseppe Conte, the country’s caretaker prime minister, said: “Let’s get ready to visit Procida,” while culture minister Dario Franceschini said the island “would accompany us in the year of rebirth”.

But some residents, wary of the pre-Covid mass tourism that has blighted so many other cultural treasures in Italy, say a balance must be struck between developing the island and maintaining its cherished characteristics.

“It’s a good thing for the island and important for the generation who will come after us,” said fisherman Francesco Scotto. “But we need to be cautious. Tourism is OK but if it becomes too frenetic, like Capri or Ischia, we risk losing our traditions.”

Those centuries-old traditions are closely tied to the ocean. Scotto is among the many islanders who would be at sea for months on end, working in commercial shipping or, in more recent decades, in the cruise ship trade.

“Whoever works at sea always has a desire to return to Procida,” said Scotto, who was born and raised on the island. “It is here we find tranquility.”

Luigi Esposito, who runs a furniture restoration shop, said many seafarers have long resisted tourism. “They would come home and want peace, not to see crowds of people,” he said, while describing Procida as “a magnet you never want to leave”.

“The community is close, like one family,” he added. “But Procida is also an island that needs to progress – with balance and care.”

Raimondo Ambrosino, the mayor of Procida, said the island is ready for the challenge as leaders work up a rich calendar of events for 2022 that will draw on its history, art, music, food, architecture and natural beauty.

Procida is just 4km-wide and made up of pastel-coloured houses, several beaches and narrow alleyways that wind through the main town. Overlooking Corricella harbour is the old walled town of Terra Murata, home to a disused prison that until 1988 hosted some of Italy’s most violent criminals. Guided tours of the prison began in 2016, and leaders are now trying to establish how to make best use of the vast building.

Procida is also home to a maritime academy, attracting students from beyond the island.

A key element of the island’s winning bid was its development of “slow tourism”, Ambrosino said.

The island gets busy in the summer, especially with Neapolitans, but the visitor numbers have so far been sustainable. Ambrosino expects this to continue as foreign visitors return after the pandemic.

“Procida is not an amusement park,” he said. “You won’t find nightclubs or big luxury hotels with spas. What you will find is a particular experience – people don’t come here to be entertained but to get to know the community and its traditions.”

In Corricella, Giuseppina Nasti is clearing tables at La Locanda del Postino, a restaurant that in its previous life was the storage space used to create the bar and restaurant in Il Postino. Procida is part of the Campania region, which is currently under “yellow zone” Covid restrictions, allowing bars and restaurants to open until 6pm.

“My dad travelled all over by sea and used to say that Procida was the most beautiful place in the world,” Nasti said. “When he retired, he didn’t want to leave again. Procida is much more authentic than Capri or Ischia.”

“There is a risk that the island could change, but it’s also true that for centuries it’s had a strong maritime identity … it’s difficult to imagine that this would suddenly be turned upside down by the fame,” he said.