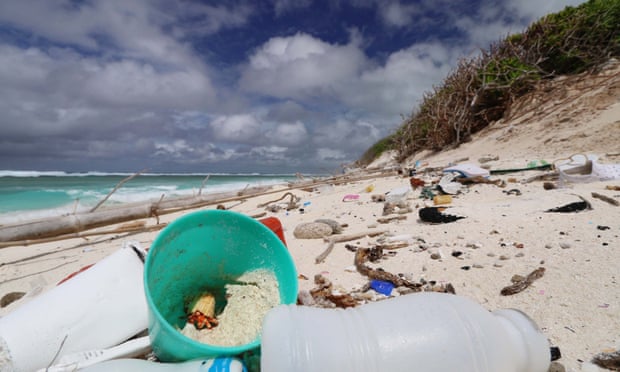 A study of Henderson Island in the South Pacific and the Cocos (Keeling) Islands, a remote territory of Australia in the Indian Ocean, found that plastic pollution acts as an insulator, increasing the temperature of the underlying sand.

Researchers warn the daily temperature fluctuations as a result of plastic pollution could have significant implications for coastal ecosystems, including animals such as sea turtles and migratory shorebirds.

Previously, plastic pollution at the two locations was found to have killed more than half a million hermit crabs.

The researchers, from the University of Tasmania’s Institute of Marine and Antarctic Studies and the Natural History Museum in London, measured daily temperature fluctuations in beach sediments at six sites on the islands.

They found plastic pollution was linked to a rise in daily maximum temperatures of 2.45C, and a drop in daily minimums by 1.5C. The study, published in the Journal of Hazardous Materials, found up to 3kg of plastic per square metre on the islands’ beaches, where some locations are uninhabited.

Previous surveys of Henderson and the Cocos (Keeling) Islands found 38m and 414m pieces of plastic pollution respectively, totalling a weight of 256 tonnes.

The study’s lead author, Jennifer Lavers from the University of Tasmania, said the plastic-linked rise in temperatures could have devastating impacts on meiofauna, organisms that live in beach sediment that play a vital role in tropical coastal ecosystems.

“They’re the equivalent of earthworms,” said Lavers. “They’re basically the creatures that turn the soil over.”

“When you have plastic piling up and piling up, it creates this insulation layer – it rapidly raises the temperature to a point where it is likely unsuitable for most animals.”

The result, Lavers said, is likely to be coastal “dead zones” from extreme heat. Meiofauna – including invertebrates and worms – is also an important food source for migratory shorebirds.

“So far we’ve been focused on climate change driving female offspring, but in reality it’s climate change and it’s likely plastics in some locations.”

At current rates, global plastic production doubles almost every decade; 12bn tonnes of plastic waste is predicted to be discarded in landfills or the natural environment by 2050.

Much of the plastic waste makes its way into the oceans and some washes ashore.

“Beaches worldwide that currently exemplify the low and moderate debris loads we observed on Henderson and Cocos are likely to transition to high debris over the next few decades,” the researchers found.

They concluded that significant shifts in how plastic waste is managed are urgently required.